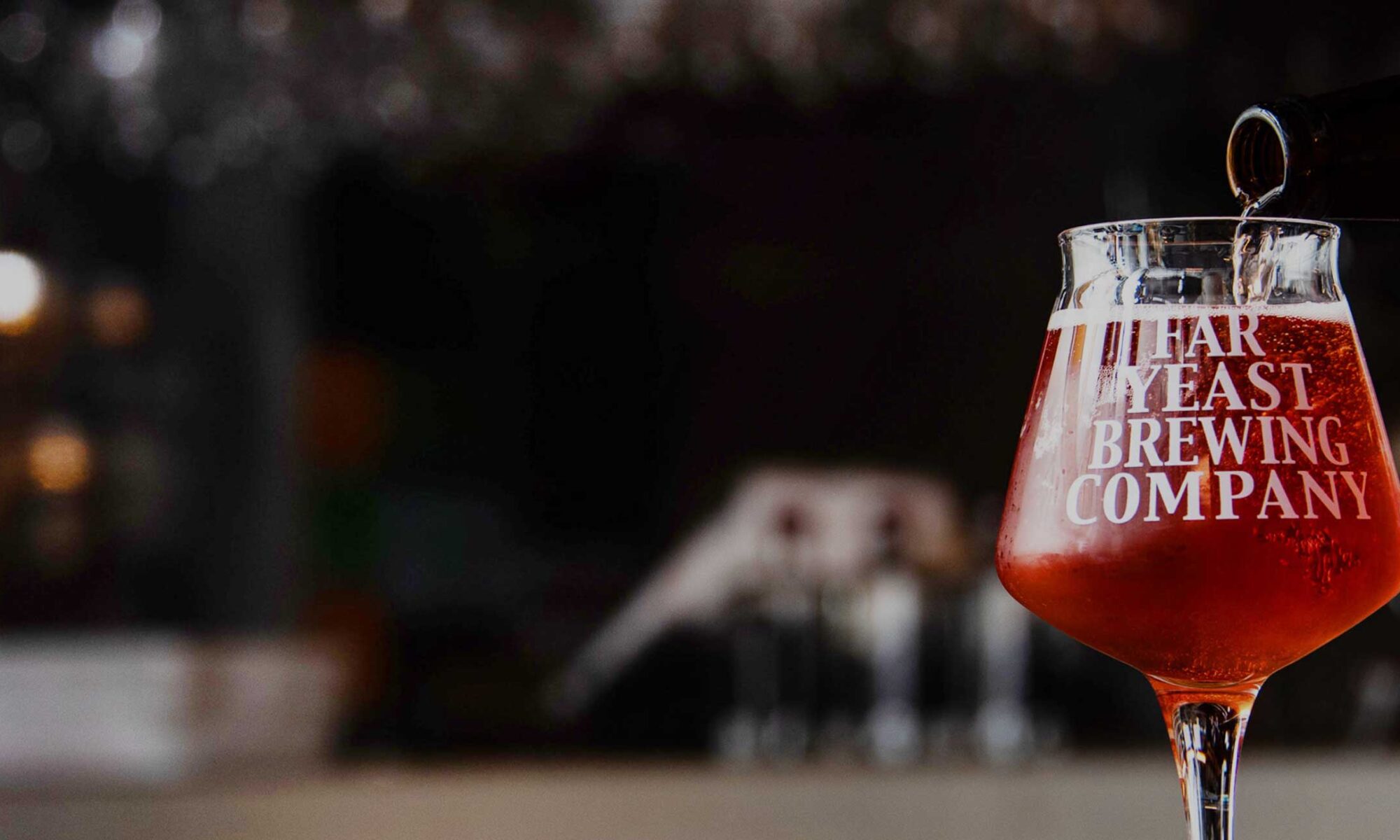 Skip to content
Off Trail is the beer brand that challenges craft beer’s new possibilities by utilizing microorganisms other than common wild yeast and beer brewing yeast. 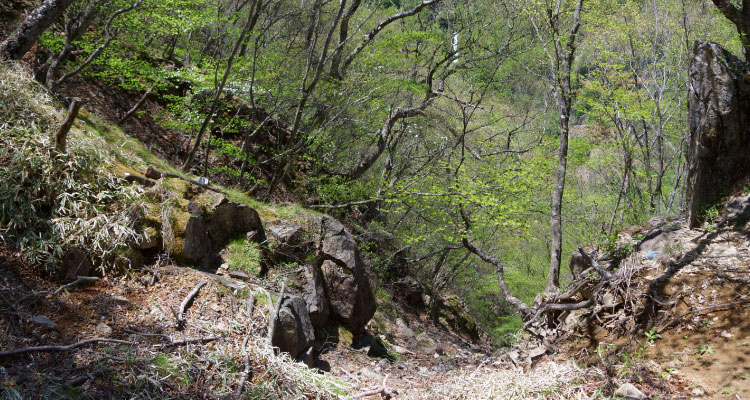 Off Trail ＝ unpaved road
Off Trail is the beer project launched in 2019 to challenge craft beer’s new possibilities.The name embodies the spirit of the project, conjuring the notion of forging a new path on an unpaved road, going Off Trail, rather than keeping to the beaten path of conventional brewing. 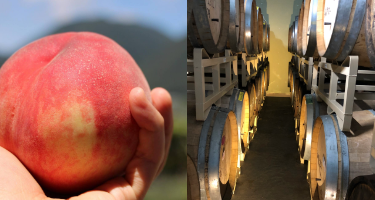 Well-crafted beer brewing with microorganisms
For Off Trail beers, we are particular about making beer using microorganisms other than brewer’s yeast, which are thoroughly washed through the modern beer brewing process. We are constantly trying to create a rich and complex aroma by utilizing various wild yeasts and microorganisms by the barrel aging method of aging beer in barrels used for wine, sake and whiskey. 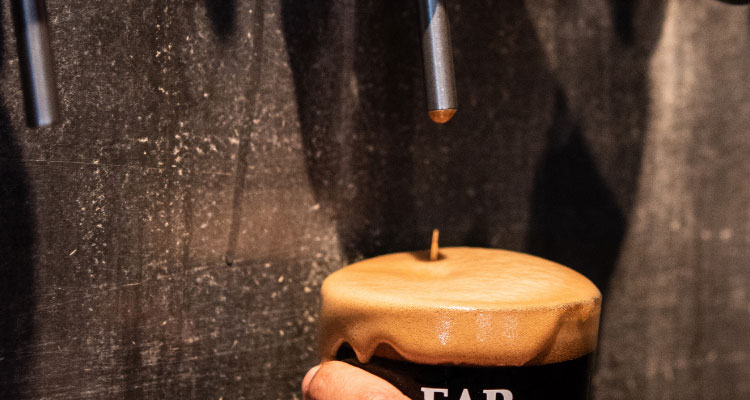 Unique and non-reproducible beer
Each barrel-aged base beer has a unique character depending on the environment inside the barrel, and you will never encounter the same taste again. Local specialties such as fruits and spices can be blended with each beer, and different kinds of base beers can be also blended together. The chemical reactions that occur in nature give us new surprises everytime we brew Off Trail beer.
Off Trail 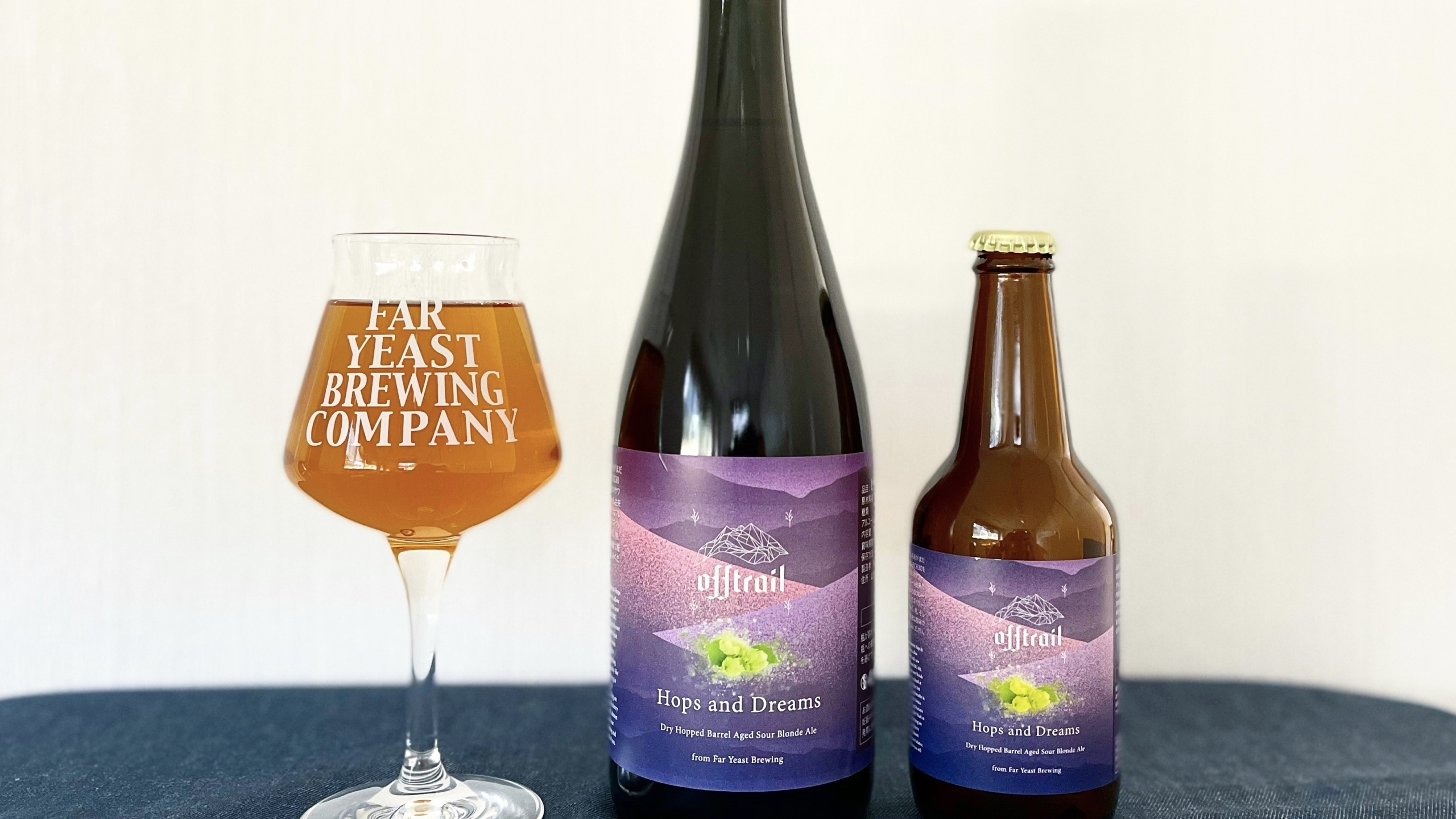 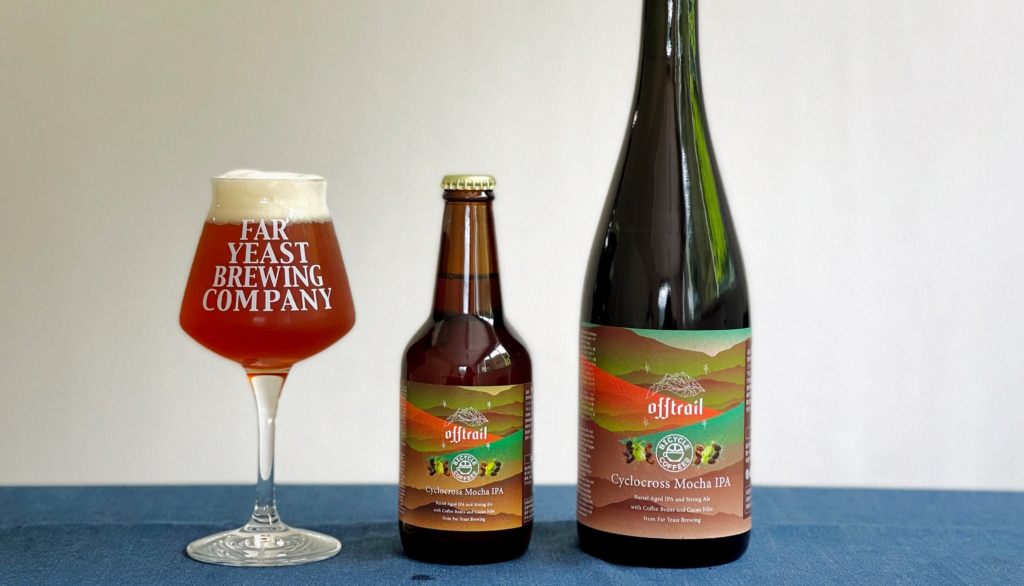 #14 Cyclocross Mocha IPA
A blend of Tokyo IPA aged in whiskey barrels and strong ale aged in wine barrels. While retaining the hop-derived citrus aroma of the base beer, barrel-aged malty, fruity, sour, woody and rich tannins with a hint of caramel and whiskey complex aromas have been added.
To add depth and balance, we have collaborated many times with our coffee beer, and the coffee beans and sweetness with a strong roasted aroma specially blended in the natural roastery "BICYCLE COFFEE TOKYO" born in the San Francisco Bay Area. Added cacao nibs to produce the scent.
See more 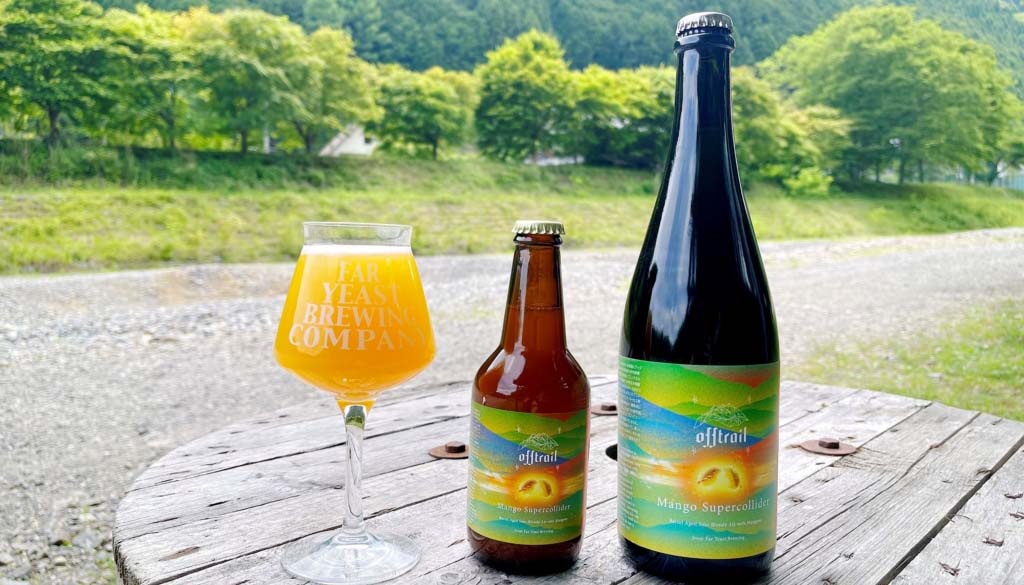 #13 Mango Supercollider
(JP) The base is made by fermenting 4 types of kettle soured blonde ale and Bretanomyces in oak barrels. Furthermore, in order to search for "delicious particles" that dramatically improve the taste of beer, we fermented it using 150 kg of mango.
See more 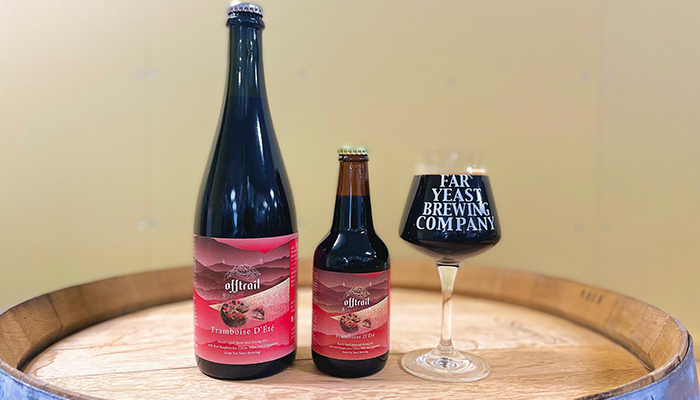 #12 Framboise D’Été
Framboise D’Ete was modeled after one of our favorite seasonal french pastries: Raspberry Chocolate Opera Cake. We started by blending our stout aged in whiskey barrels for 14 months into a stainless tank where we added raspberries and cacao nibs to undergo a second fermentation. Next, we topped it off with some Strong Ale aged in Wine barrels for 27 months and added a dash of cinnamon.
See more 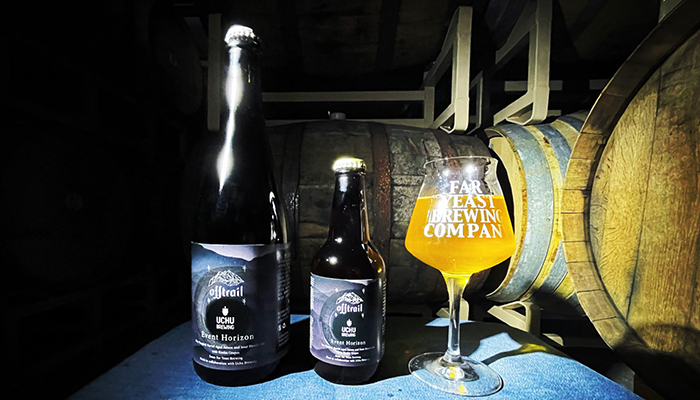 #11 Event Horizon
Event Horizon is the collaboration beer with a great neighbor, Uchu Brewing that has their base in Hokuto city in the same prefecture, Yamanashi. We blended two beers together for the base beer of Event Horizon: our Japanese Grape Saison (released in Fall 2019) aged in whiskey barrels for 18 months and a kettle soured blonde ale fermented on Brettanomyces and aged in wine barrels for 11 months. We racked the barrels to the tank and dry-hopped the blend with Citra, Simcoe, and Nelson Sauvin hops. Especially recommended for those who like barrel aged sour and hop forward beer.
See more 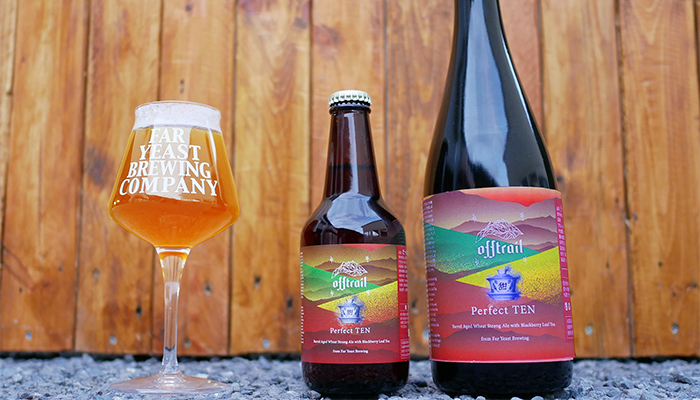 #10 Perfect TEN
The tenth Perfect TEN was aged 17 months in oak and acacia barrels and then blended with Ten Cha, i.e. blackberry leaf tea. The base beer, after the aging, was fruity, woody, funky, and malty. Still, Ten Cha's addition gave it a deep earthy aroma, licorice spice, a hint of pipe tobacco, and the sweet taste characteristic of Ten Cha.
See more 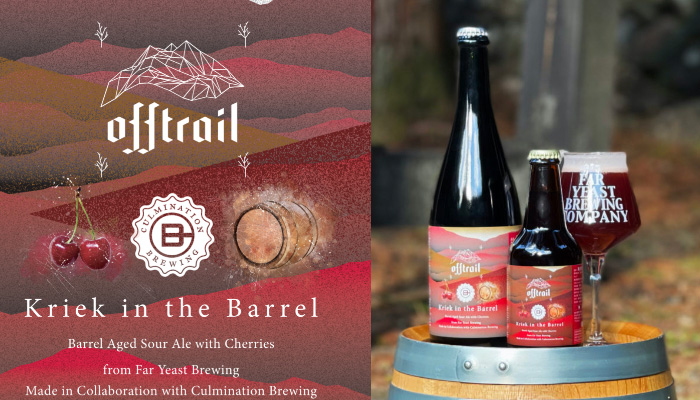 #9 Kriek in the Barrel
Collaboration with our friends at Culmination Brewing in Portland, Oregon.
Part of the wort used to make Kriek in the Flesh was married with Brettanomyces Lambicus and fermented for 8 months in oak barrels. The flavors matured into a complex combination of fruit, wood, acid, funk, and malt. The Beer's garnet red color beckons you to take in the aroma of red wine vinegar, unfolding into fresh red cherries and red roses. Gentle sourness precedes blood cherry notes on the palate followed by leathery funk and cherry stones, terminating in a dry, fruity finish.
See more 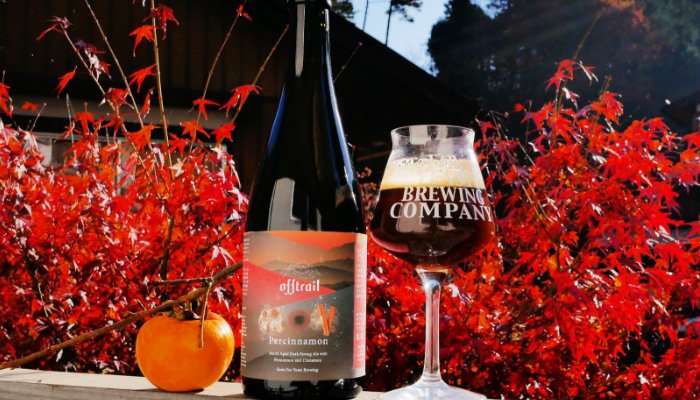 #8 Percinnamon
Bright bursts of orange fruit is a telltale sign of late autumn in Kosuge.
Percinnamon’s alluring aroma invites you in with a pop of cinnamon spice followed by deep notes of rich caramel, dried apricots, and raisins. The first sip reveals flavors of dried persimmons, chocolate, cinnamon spice, and barrel tannin in its full bodied, warm embrace. Percinnamon is the Off trail 1 year anniversary beer.
See more 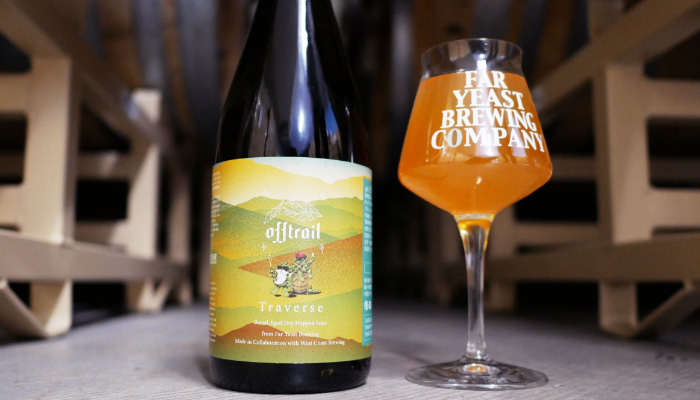 #7 Traverse
The ingredients for "Traverse" had to travel to Japan from the far corners of the globe, such as hops from New Zealand, malts from Belgium and Germany, yeasts from America, barrels from France. Traverse's Tangerine, White Grape, and Tropical Fruit aromas combine with the gentle sourness, bretty funk, and oak aged goodness of the base beer to take you on a flavor journey across the world. Special collaboration with West Coast Brewing.
See more 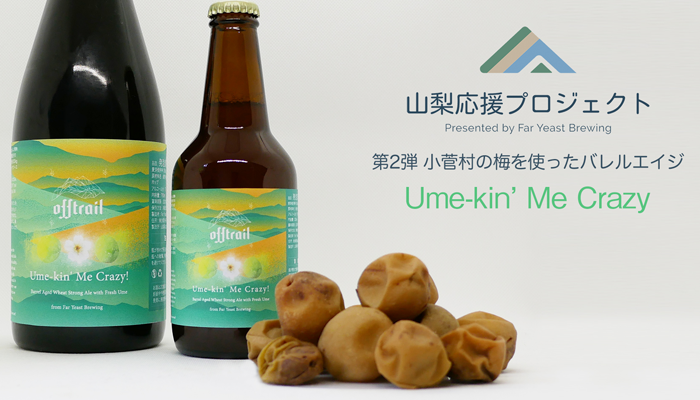 #6 Ume-kin’ Me Crazy!
The beer is brewed with Japanese Ume harvested down the road from Far Yeast’s Genryu Brewery in Kosuge Village, Yamanashi Prefecture. Ume-kin' Me Crazy! is a beer with various characters, including a mellow plum aroma, soft tannins from the barrel aging, and an aroma reminiscent of marzipan, a Middle Eastern pastry made from almonds.
See more
1 / 212»