Far Yeast Brewing Co. (Head office: Shibuya-ku, Tokyo; Representative Director: Shiro Yamada), a craft beer brewery that brings beer brimming with originality from Japan to the world, has announced the second installment of the “Yamanashi Support Project” to liven up Yamanashi Prefecture with beer: “‘Ume-kin’ Me Crazy!” The beer is brewed with Japanese Ume harvested down the road from Far Yeast’s Genryu Brewery in Kosuge Village, Yamanashi Prefecture. The presale started on Saturday, September 5 at Far Yeast Brewing’s online store.

As COVID-19 continues to lead to event cancelations and a decline in tourism around Yamanashi prefecture, we at Far Yeast Brewing are doing what we can to help revitalize our local agricultural, tourism, and food & beverage industry partners the best way we know how: brewing beer! Our first Yamanashi Support Project, “PEACH HAZE,” a beer using peaches from Yamanashi Prefecture, was a great success. We began taking pre-orders in July, and sold two entire batches before the beer was released.

For the second Yamanashi Support Project we teamed up with local Kosuge plum farm manager, Mr. Hiroki Aoyagi, to make “Ume-kin’ Me Crazy!”

Kosuge Village has seen a number of new people moving to the village in recent years but the average age of village residents, especially farmers, is still increasing. Mr. Hiroki manages the plum farms that are no longer being maintained by the aging farmers and uses the fruit to hold workshops on how to make various food products such as umeboshi, Japanese pickled plums.

To harvest the ume for this beer, the Genryu Brewery staff went plum picking on a sunny Tuesday morning. Mr. Hiroki kindly shared 200kg of the plums we harvested with us as a beer ingredient. participated in harvesting the plums, and Mr. Aoyagi shared the harvested plums with us as ingredients for beer. The number of plums used for the brewing process was 200kg. This project, notably participated picking plum, was a significant experience for us. As a result, we could make new friendships with the Kosuge village locals.

We fed plums harvested from Kosuge Village into a barrel-aged Belgian yeast brewed wheat-strong ale, and We also blended it with other barrel-aged wheat-strong ales to create a complex sour ale with a refreshing plum aroma. Ume-kin’ Me Crazy! is a release from our third brand, “Off Trail” that focuses on the challenge of creative beer making. Ume-kin’ Me Crazy! is a beer with various characters, including a mellow plum aroma, soft tannins from the barrel aging, and an aroma reminiscent of marzipan, a Middle Eastern pastry made from almonds. Umme-kin’ Me Crazy! is available for pre-sale in 750ml large bottles only at the company’s online store ahead of its nationwide release in mid-September. Due to the limited quantities, the sale will end when the product is sold out. We will continue to use Yamanashi Prefecture ingredients to create a variety of made-in-Yamanashi beers in the future. 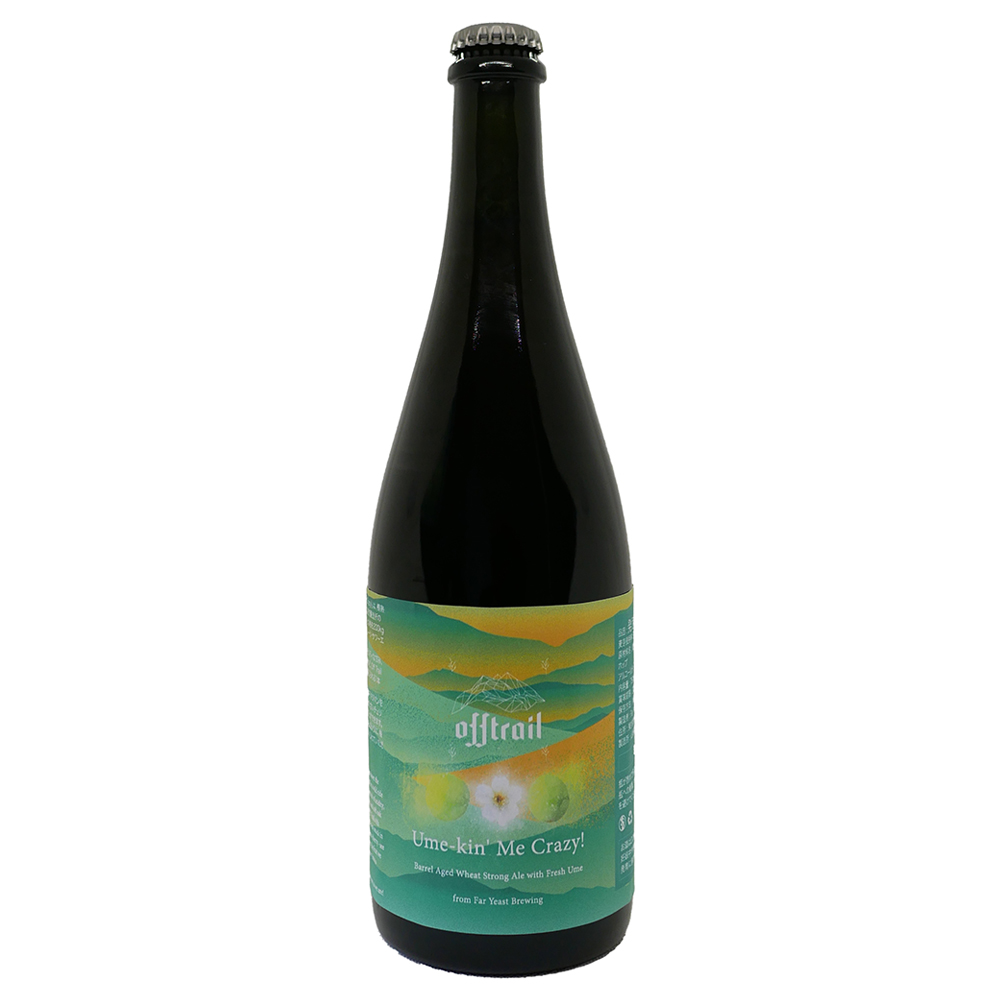 This beer name Ume-kin’ Me Crazy! was as word play, named after “You’re Making Me Crazy!”

As the name sounds, we hope this beer makes you intoxicated with the seductive aroma and complex flavor of plum.