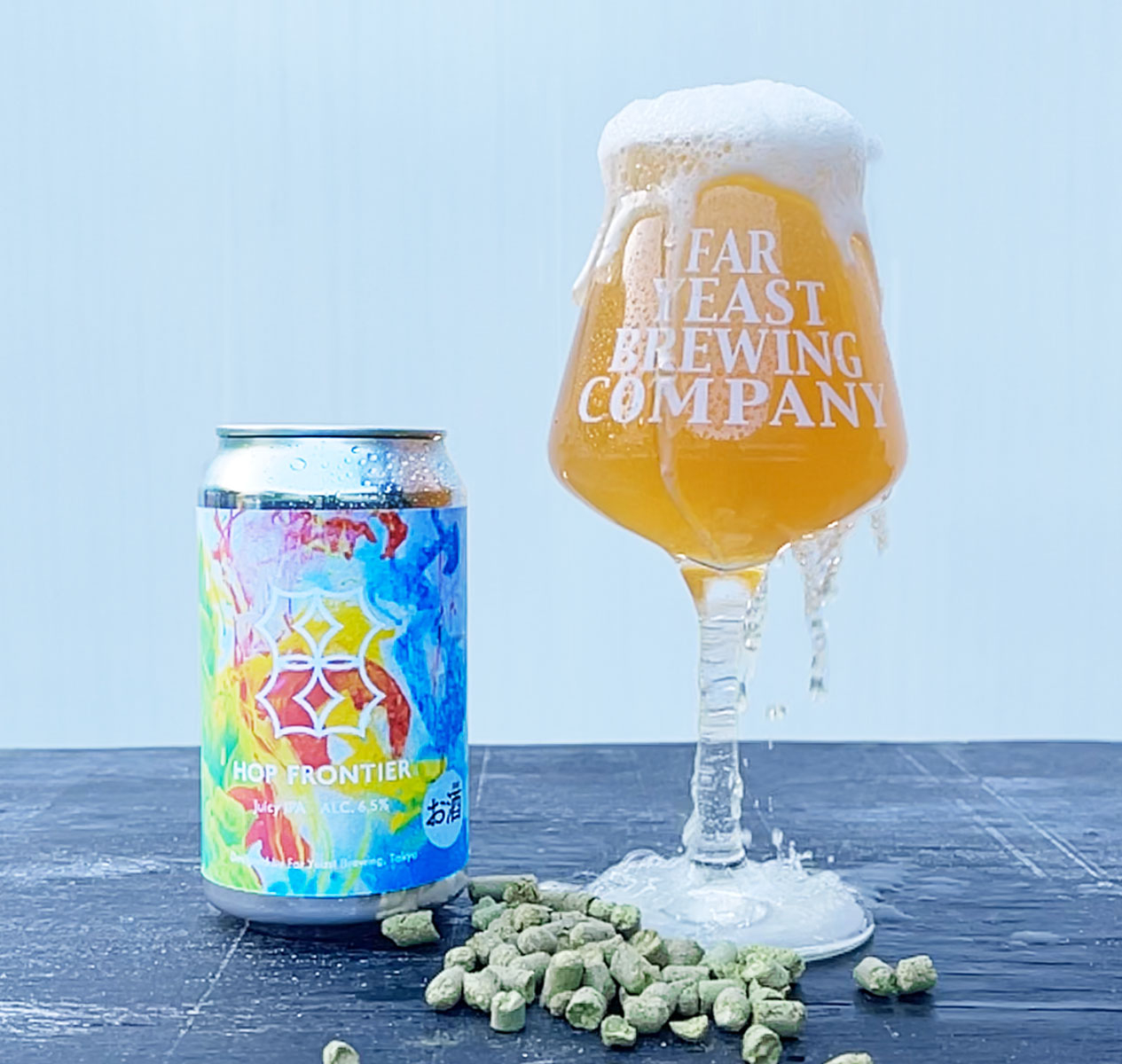 Far Yeast Brewing (Head Office: Kosuge Village, Yamanashi Prefecture, Japan; President: Shiro Yamada), whose mission is to introduce original beers from Japan to the world, will release a new product, Far Yeast Hop Frontier -Juicy IPA- on Wednesday, March 3rd.  We took the latest hop theory, applied it to the most advanced brewing methods in Japan, and challenged ourselves to explore the en vogue Juicy IPA style’s uncharted territory. Our new Juicy IPA is full of fruity and tropical aromas, made by maximizing the “aroma components” of hops using a scientific approach. 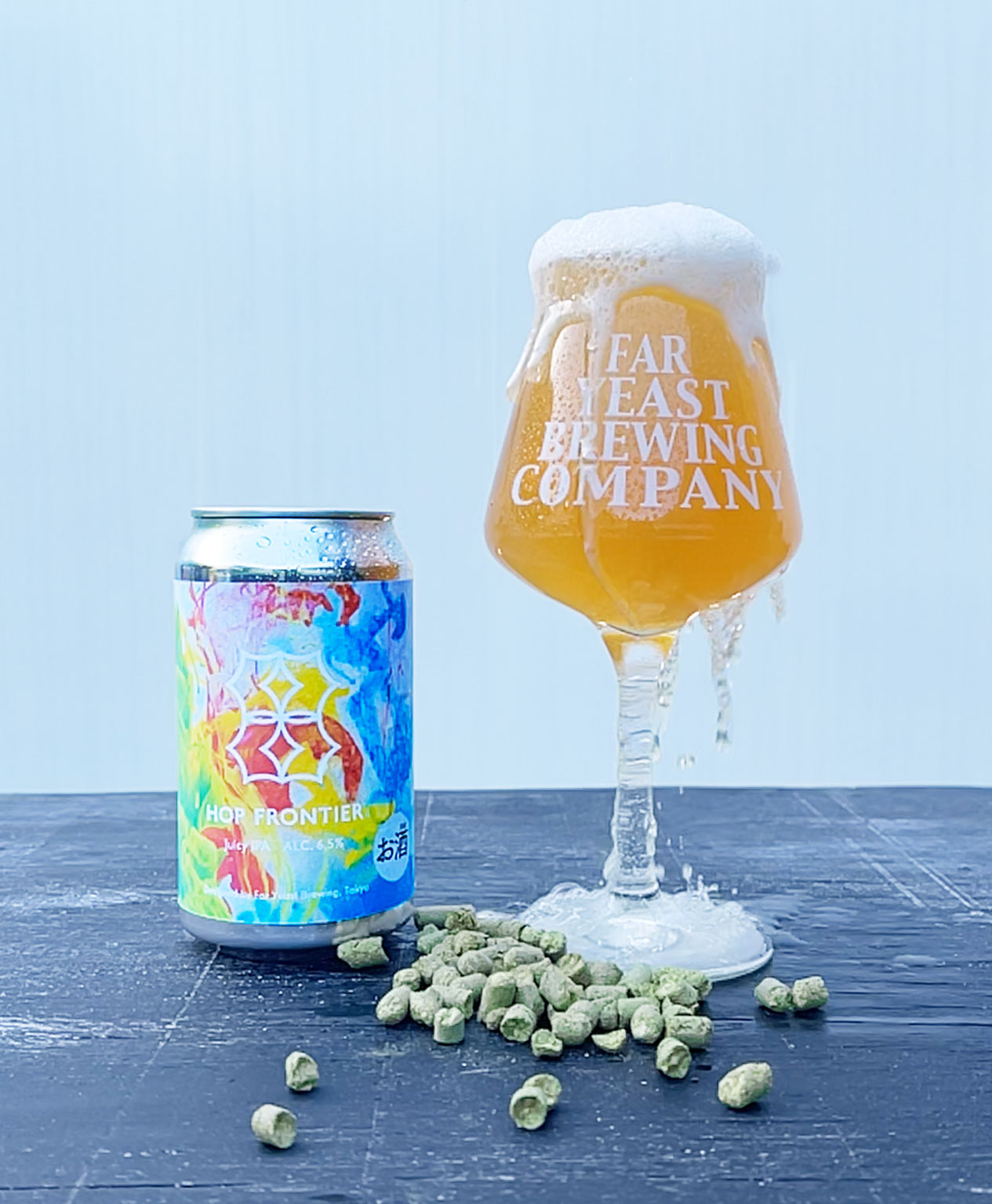 In recent years, Japan’s craft beer scene has been growing rapidly. As many breweries have sprung up across the country, new and freer beer styles have emerged and Japanese craft beer fans have begun to embrace them. Against this backdrop, Far Yeast Brewing continuously monitors new beer styles and brewing techniques worldwide, actively working with hop suppliers in Japan and overseas to apply cutting edge research to develop new products and set new standards in brewing.

In 2019, we were the only Japanese craft brewery to participate in the annual hop selection held by global hop supplier Yakima Chief Hops® (HQ: Washington, USA, CEO: Ryan Hopkins, hereinafter YCH). There, we deepened our relationships with hop growers by visiting hop harvesting and processing sites and by participating in seminars held by hop suppliers. As a result, we are now lucky enough to source the majority of our hops directly from YCH.

Through such efforts, we actively gather information from overseas and access the most advanced theories and technologies on the forefront of beer brewing. We put this knowledge into practice faster than anyone else in Japan. For example, in February of 2021, we were invited by YCH to co-develop a beer using YCH’s innovative new products, and have since released two collaboration beers that were well received by craft beer fans.

Combining the latest research and our brewing expertise, we have taken on the challenge of brewing beer based on the latest hop theory.

■A new standard product that delivers the “now” of craft beer

Far Yeast Hop Frontier -Juicy IPA-1 uses a scientific approach to maximize the beer’s hop aroma. The Juicy IPA style’s low bitterness and juicy, fruity flavors have grabbed the attention of Japanese craft beer drinkers. Far Yeast Brewing’s two leading brands, “KAGUA” and “Far Yeast”, were launched in 2011 with our company’s founding and in 2017 when we began brewing at our production facility in Yamanashi respectively. “Hop Frontier -Juicy IPA-” joins our Tokyo Series, originally conceived of in 2015 with “Tokyo IPA”, under the “Far Yeast” brand. This welcome addition to our brand portfolio marks the first new beer positioned as a core range product in 6 years. In addition to inheriting the core concepts behind the Far Yeast brand: built to exhibit a refined and sophisticated taste and quality that is appealing to both dedicated fans and craft beer beginners, the new “Hop Frontier” series also aims to deliver the “now” of craft beer, showcasing the latest trends in our ever-growing industry.

1: Juicy IPA
This style is defined as “Juicy or Hazy India Pale Ale” in the Beer Style Guidelines by the US Brewers Association. The most remarkable feature of this beer style is that it focuses on bringing out the “juicy flavors” of the hops and has a cloudy, unfiltered appearance. The Juicy IPA style is currently one of the most sought-after beer styles among avid craft beer fans worldwide. Despite being recognized as a new beer style as recently as 2018, the Great American Beer Festival, the most prestigious beer competition in the United States, received the most entries in the Juicy IPA category in 2019 and 2020.

■ Bringing about “unprecedented fragrance” with “Survivables” and “Biotransformation”

The latest research on hops focuses on the analysis of aromatic compounds that are typically lost in the brewing process. Sensitive aromas are often driven off by heat while boiling, by off-gassing in active fermentation, or through yeast metabolism. The latest research aims to increase in quantity and quality of “Survivables”2, the aroma compounds that survive the brewing process. Correct and intentional handling of hops on the hot side of brewing can lead to big changes in hop aromatics in the final product.

In addition to three of our favorite hops, we added proprietary hop blend TRI-2304CR and the new Talus hop to maximize the impact of “survivables” in “Hop Frontier -Juicy IPA-”. After several years of research on “survivables” Yakima Chief Hops created TRI-2304CR, a blend of hops selected for increased aromatic solubility to produce a hop-forward, highly fragrant beer. The new Talus hop is expected to produce dynamic, vibrant, and fruity aromas when used in combination with TRI-2304CR. To effectively extract the desired aroma compounds, the timing and ordering of hop additions were optimized at each stage of the brewing process.

Finally, we considered the potential for the beer’s survivable hop compounds to be altered through “biotransformation”3. We selected yeast that would favorably alter some but not all of the dissolved hop compounds into new aromas, producing a layered and elegant fragrance that is impossible to achieve with hops alone. By executing these carefully laid plans, we maximized aroma compounds that brewers have had difficulty producing in the past, creating an “unprecedented” aroma. The resulting beer is a Juicy IPA with a fruity, tropical aroma bursting with a creamy, juicy flavor.

Survivables are compounds that have a low sensory threshold and are relatively difficult to volatilize e.g. monoterpene alcohols, hop-derived esters, and thiols. These aroma compounds are characterized by their ability to “survive” the brewing process, contributing heavily to the beer’s aroma. Scott Janish introduces a methodology that effectively maximizes the use of Survivables to extract aroma on the hot side of the brewing process in his new book, “The New IPA: Scientific Guide to Hop Aroma and Flavor”.

Biotransformation refers to the chemical changes that occur when yeast reacts with hops’ extracted ingredients during fermentation. As a result, new aroma components are generated that cannot be produced by hops alone.

“Far Yeast Hop Frontier -Juicy IPA-” will be available at liquor stores and restaurants nationwide in Japan starting Wednesday, March 3rd. The Far Yeast Brewing online store will start taking pre-orders on cans at noon on Thursday, February 25. The beer will be on tap at all three of our directly managed stores on Saturday, February 27. However, regulars at Far Yeast Tokyo Brewery & Grill in Gotanda, Tokyo will have been able to taste a preview of the beer on tap starting in mid-February. A limited number of cans will be made available for sale at our directly managed stores when the beer goes on tap.

The beer goes on tap at our directly managed stores, where you can taste the latest products before anyone else, according to the following schedule:

3:00 p.m. – Advance tap opening and advance sales of a limited number of 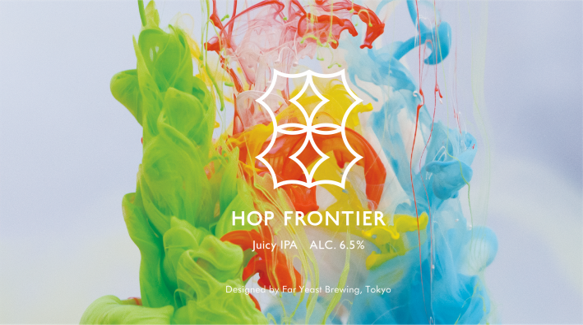 The label design emphasizes three core concepts behind this beer: “experimental”, “science”, and “advancement”, reflecting the importance of the research and theory that went into the product development.

The label illustrates our efforts to pursue unknown flavors and aromas through the imagery of colorful liquids being mixed. The mixture of various shapes represents the complex and delicate taste of “Hop Frontier”.

In contrast, the symbol mark is simple and powerful, representing a new challenge. The symbol combines elements from the shape of hop cones and the appearance of the skeletal formula of organic compounds associated with beer aroma. 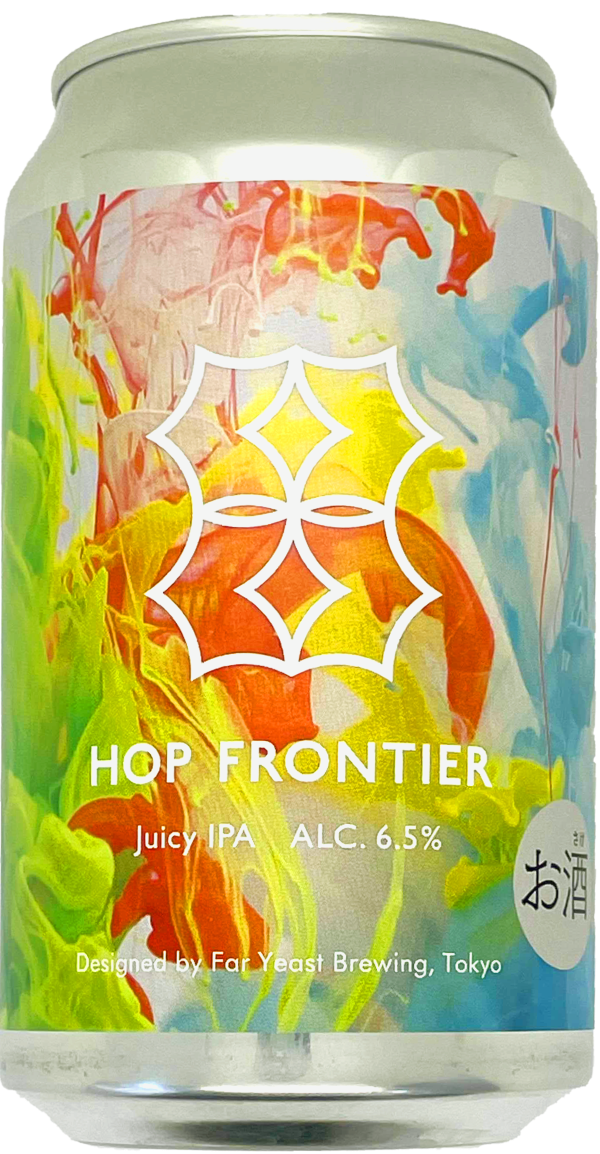