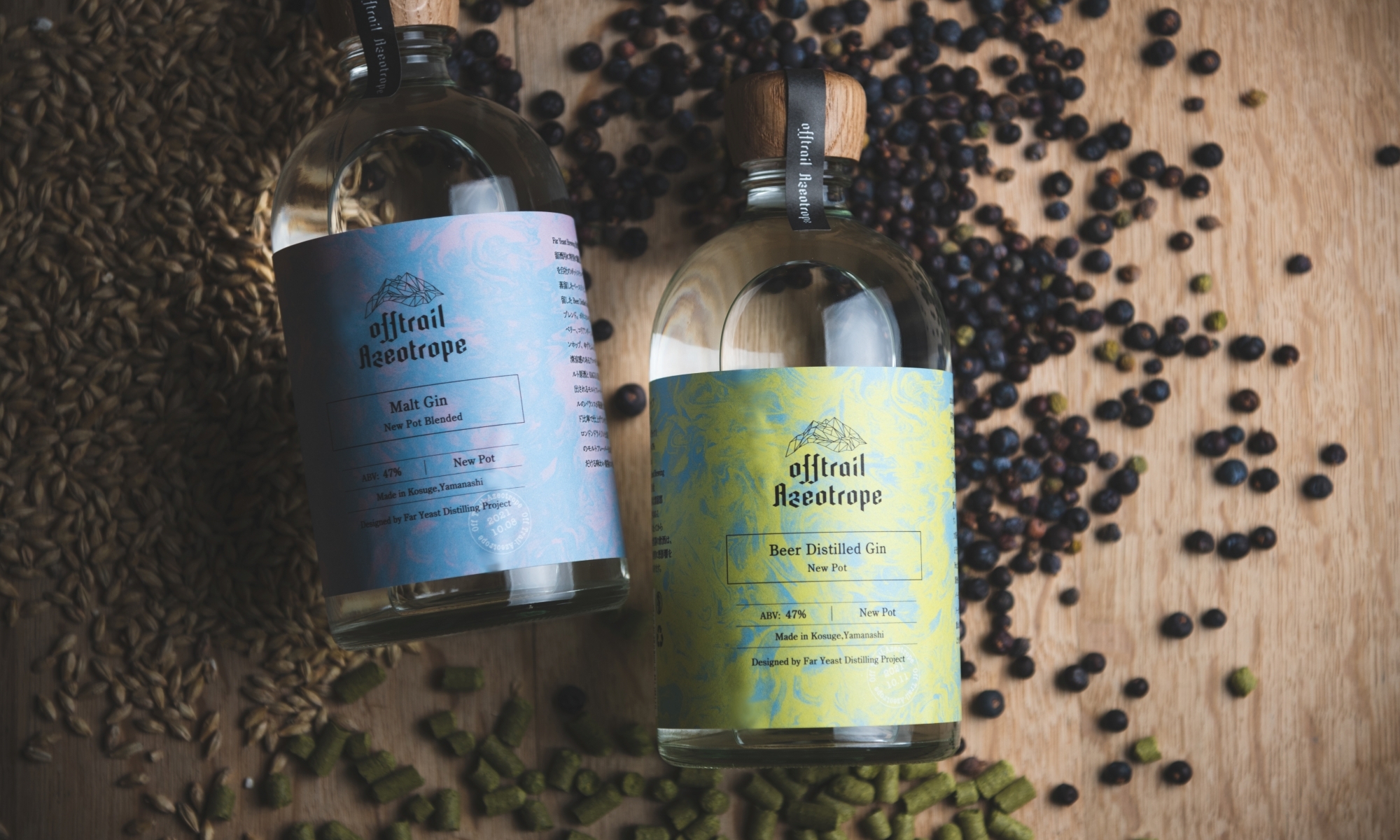 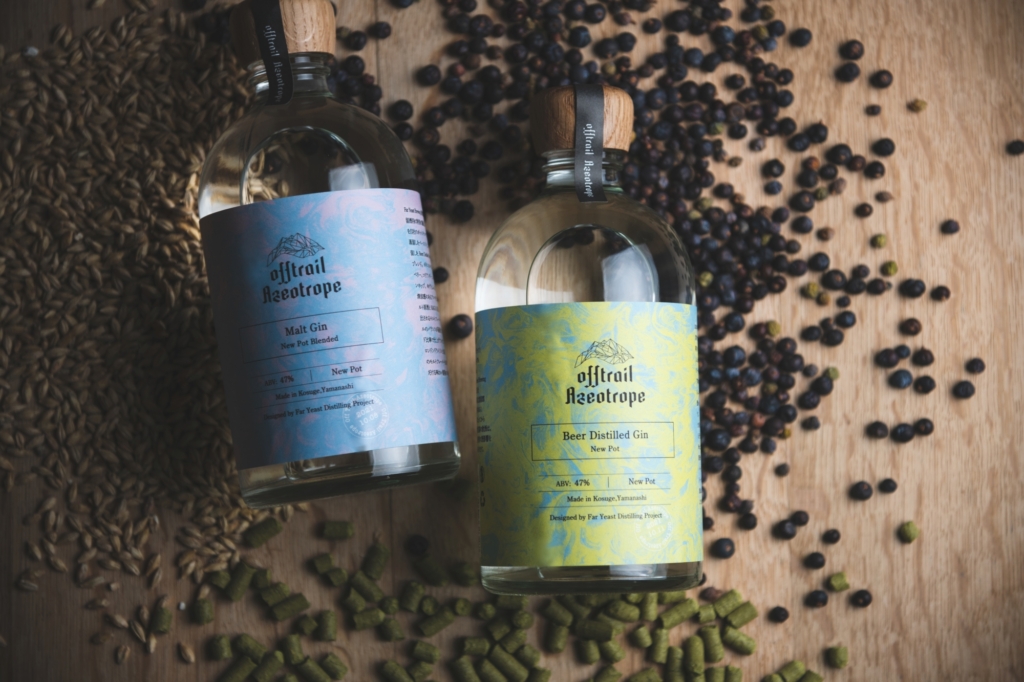 The most commonly consumed style of gin is London Dry Gin, whose base is a neutral spirit produced with the aim to remove extraneous flavors apart from the botanicals used to infuse the liquor. Genever, the historical precursor to London Dry Gin, is a classic spirit that uses malt wine made from barley, wheat, and other grains as its base. Contrary to British Gin, Genever is characterized by its strong aroma derived from malt.

The historical drink, Genever, inspired the creation of Off Trail – Azeotrope. Far Yeast employs techniques for flavor extraction cultivated through brewing craft beer. The process starts by carefully distilling flavorful malt-based washes in a pot still to preserve attractive aromas and flavors in the final spirits. A variety of botanicals including hops, coriander, and fruit are then added to flavor the liquor. Finally, the liquor is distilled once more to purify and concentrate the spirits, retaining a strong flavor profile from the malt-based wash. In some cases the resulting spirit is barrel aged, like many traditional Genevers were in the past. These barrel aged spirits take on new expression through blending and experimentation in the fashion that has become a cornerstone of the Off Trail program.

Mr. Shigeyuki Nakagaki, owner-bartender of “Barossa cocktailier,” participates in the project and offers expert advice based on his knowledge cultivated at the forefront of the cocktail and spirits industry.

An “azeotrope” is a mixture of two or more liquids that retains the same composition ratio before and after boiling. The name “Azeotrope” symbolizes Far Yeast’s crossover between beer and spirits, the former being the current specialty and the latter a new endeavor. Far Yeast aims to use the skills acquired through brewing craft beer to bring a fresh approach to the world of craft spirits. 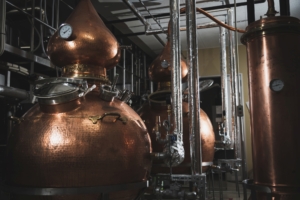 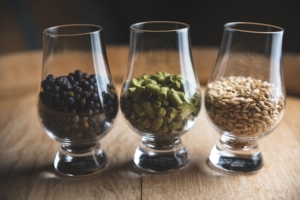 ■ Turning beer wasted due to the pandemic into spirits

The Coronavirus pandemic has affected sales in the alcohol industry worldwide. In response to the dip in sales, Far Yeast sent 5,000 liters of unsold beer to be distilled by an industry partner to produce a craft gin.

This experiment yielded results positive enough that two pot stills were commissioned for installation at the brewery in Kosuge Village, Yamanashi Prefecture, in July 2021 (pictured above).

The number of small-scale craft distilleries has increased dramatically, and the market for craft gin is booming. From 2017 to 2018 the number of distilleries in the US grew 15% to 1,835, and further market growth is expected in the future (Source: American Craft Spirit Association).

By broadening our alcoholic beverage production beyond the boundaries of beer, Far Yeast aims to reduce environmental impact by recycling waste products and create drinks that are more attractive to health-conscious customers.

“Beer Distilled Gin – New Pot” was made by recycling a large amount of beer that went unsold due to the declaration of a state of emergency during the Coronavirus pandemic. The unsold beer was distilled in a pot still at a consignment distillery and turned into a craft gin. While retaining many of the malt and hop flavors of the beer, juniper berries and yuzu were added as aromatic botanicals to create a craft gin that is reminiscent of a delicate perfume.

“Malt Gin New Pot Blended” is a blend of spirits distilled from KAGUA, our regular beer made with sansho and yuzu, and malt-based wash brewed especially for distillation. The botanicals include juniper berries, coriander, Nelson Sauvin hops, and yuzu. The Malt Gin was blended to achieve an optimal balance of malt and botanical flavors. This flavor-oriented spirit is distinguished from London Dry Gin by the malt flavors in the raw ingredients.

The majority of the Off Trail – Azeotrope spirits will be matured in barrels before being blended and sold. “Beer Distilled Gin – New Pot” and “Malt Gin – New Pot Blended” are limited products that did not undergo barrel maturation. They will both go on sale nationwide on Friday, October 29th. Pre-order sales will start on the Far Yeast online store from 1:00 pm on Tuesday, October 26th. 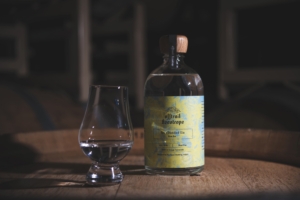 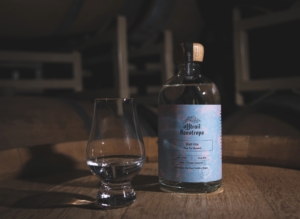 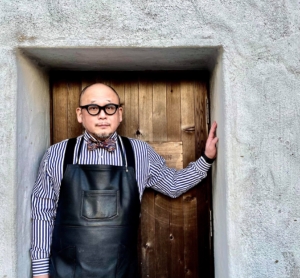 Born in 1968, Mr. Nakagaki is the owner and bartender of BAROSSA cocktailier (Gifu City, Gifu Prefecture).

He has won awards at various cocktail contests, including World Class Japan. He is a lecturer and judge at seminars in Japan and abroad, and is the author of several cocktail books. Mr. Nakagaki was voted the best bartender in Japan in 2017 by Drink Planet’s bartenders and liquor professionals. With his knowledge gained from the front line of the cocktail and spirits industry, he supervised the planning, production, and quality of our “Off Trail – Azeotrope” project.

Off Trail – Azeotrope began in October 2021 is a craft spirits brand designed as a crossover between beer and spirits. Off Trail – Azeotrope is an offshoot of the Off Trail project, an advanced brewing program using diverse microflora and barrel aging. The brand’s mission is to make innovative spirits and liqueurs.

An “azeotrope” is a mixture of two or more liquids that retains the same composition ratio before and after boiling. The name “Azeotrope” symbolizes Far Yeast’s crossover between beer and spirits, the former being the current specialty and the latter a new endeavor.