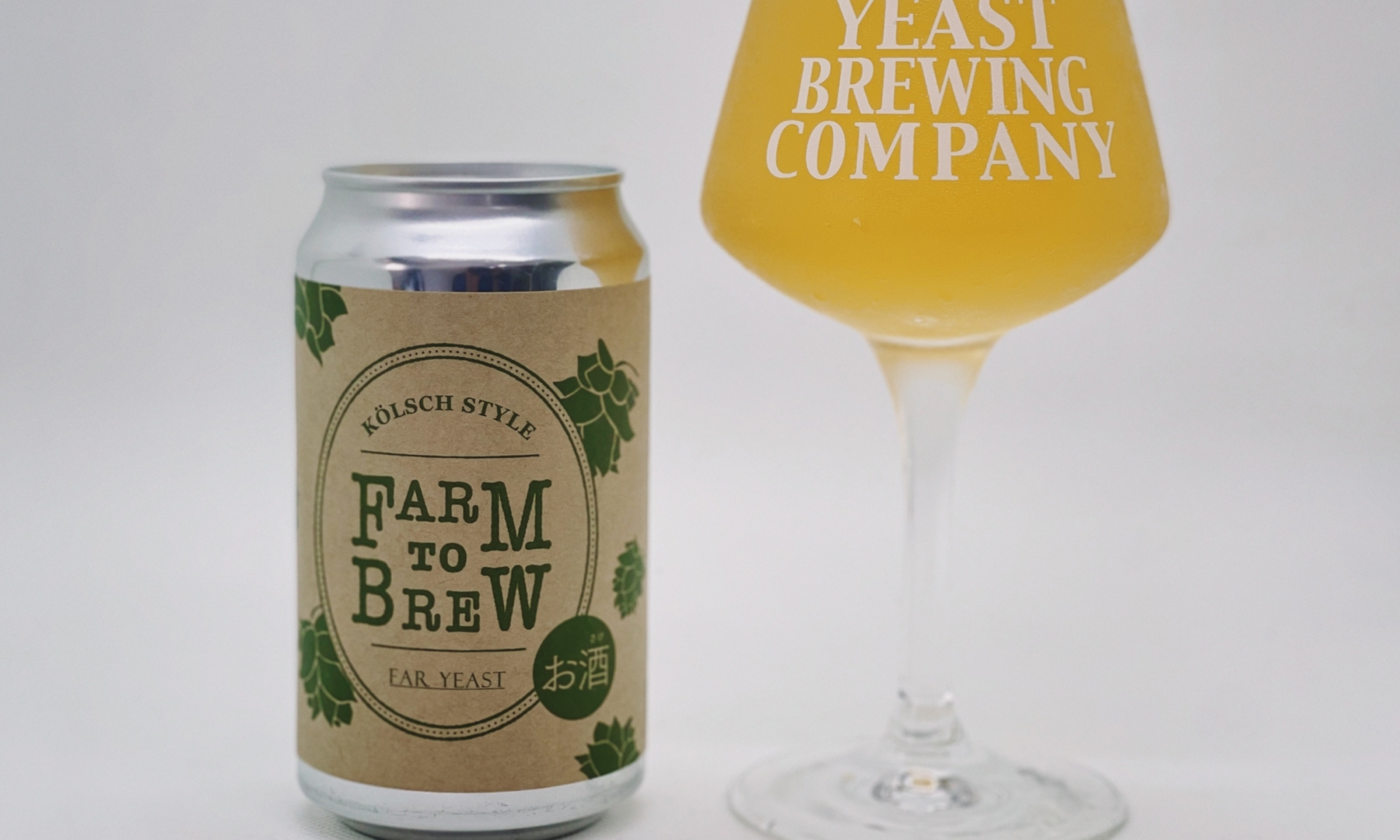 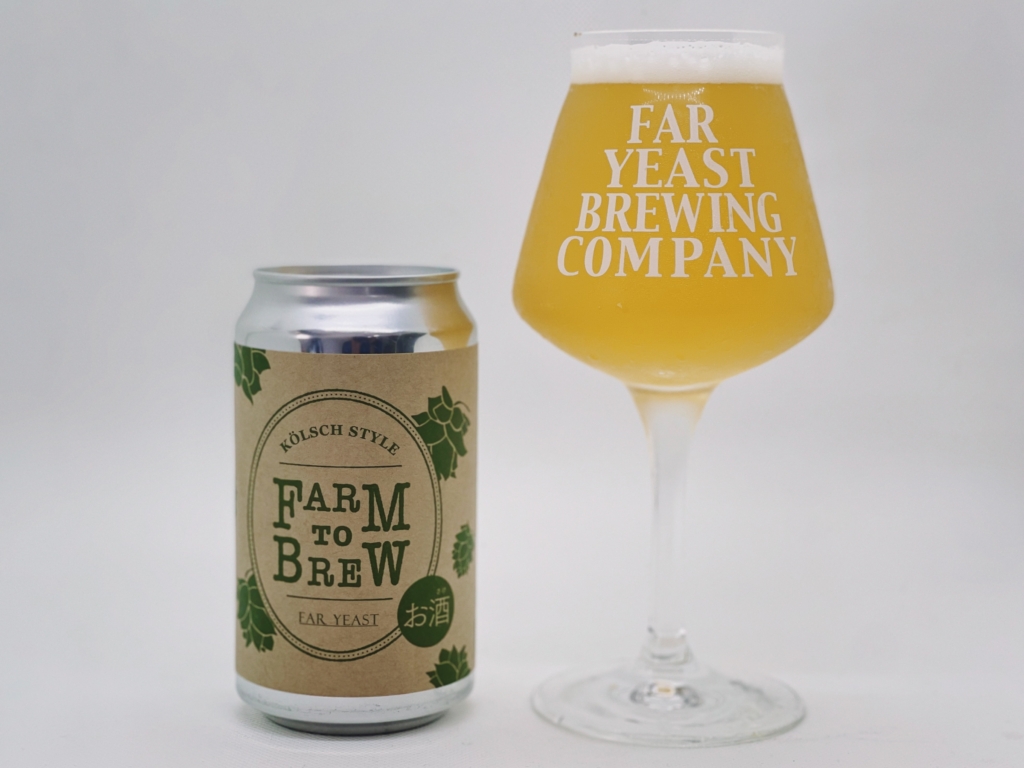 ■A new challenge of making fresh-hop beer, using hops picked in the morning  and brewed on the same day.

The seventh installment of the Yamanashi Support Project to enliven Yamanashi with beer is “Far Yeast Farm to Brew,” which uses fresh hops from Kobayashi Hop Farm, a hop grower in Hokuto City, Yamanashi Prefecture.

In some parts of the U.S., fresh hop beers are brewed during the hop harvest season, when the hops are harvested and brewed on the same day, due to the fact that hop fields are spread out near the brewery.

Since hops begin to deteriorate from the moment they are harvested, they are usually dried for long-term storage. However, since they are heated, some of the aroma components will inevitably volatilize. Even when fresh hops are used to make beer without the drying process, frozen hops are mostly used, as there are only a limited number of places in Japan where hops are grown nowadays, and they are frozen immediately after harvesting.

Hokuto City in Yamanashi Prefecture, located at the southern foot of Mt. Yatsugatake, was the first place in Japan to start full-scale hop cultivation. Today, however, the number of hop farmers in the prefecture is on the decline. Mr. Yoshimichi Kobayashi of Kobayashi Hop Farm is working on hop cultivation to convey the appeal of hops and to revive and revitalize Hokuto City hops.

In late July, the brewery staff visited Mr. Kobayashi’s farm in Hokuto City early in the morning to help harvest 40kg of hops, which took about 4 hours. In the early afternoon, the fresh hops were brought to the Genryu Brewery where the brewing team was waiting in the shortest possible time, and in order to effectively extract the aroma components, the flowers were manually broken down one by one and put directly into the brewing kettle.

■ The Kölsch style which is aromatic and has a light body taste.

Far Yeast Farm to Brew is a Kölsch-style beer that is aromatic and easy to drink in order to simply enjoy the aroma and flavor of fresh hops.

To achieve a classic Kölsch style, we blended three types of malt: Pilsner Malt, Carapils Malt, and wheat. For the hops, we used a small amount of the German hop Merkur for the bittering, but other than that, all the hops are from Hokuto City. The two varieties used this time were “Sorachi Ace,” which has an aroma like cedar, cypress, and lemongrass, and “Sterling,” which has a refreshing bitterness with little stimulation.You can enjoy the fruity flavor of malt and hops in a refreshing and drinkable way.

Far Yeast Farm to Brew will go on sale to the general public on Saturday, September 18, and our online store will start accepting pre-orders from 13:00 on Tuesday, August 31. We will continue to work with producers and businesses in Yamanashi Prefecture to bring you a variety of “Made in Yamanashi” beers. 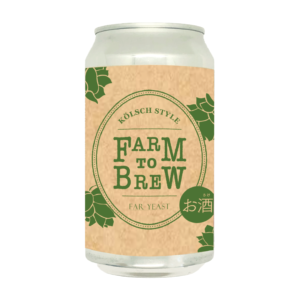 Kobayashi Hop Farm is located in Hokuto City, Yamanashi Prefecture, at the southern foot of Mount Yatsugatake, a pioneer in hop cultivation. They are working on the succession and development of hop cultivation.

Most domestic hops are grown by contract farmers of major beer manufacturers, but Kobayashi Hop Farm does not have an exclusive contract and sells hops freely to spread the appeal of hops.

Far Yeast Brewing’s “Yamanashi Support Project” was launched in July 2020 with the hope of revitalizing local industry through brewing beer using products produced in the prefecture. In October of the same year, we relocated our headquarters from Shibuya to Kosuge Village in Yamanashi Prefecture, where our brewery is located, and further strengthened our ties with producers and businesses in the prefecture. So far, we have brewed “Peach Haze” using peaches from Yamanashi City, “Ume-kin’ Me Crazy!” using plums from Kosuge Village where the brewery is located, “GRAPEVINE” using grapes from Nirasaki City, and “Omoiro Tomato Ale” using tomatoes from Hokuto City. These beers, along with other brews, help to spread the appeal of Yamanashi throughout Japan.

< 前のページ
The sixth edition of the Yamanashi Support Project, using beers to liven up Yamanashi. Far Yeast Peach Haze, with the aroma of freshly picked peaches, will be available for pre-order on August 17 (Tue).
次のページ >
(JP) 「Far Yeast Peach Haze」のお取扱い店について