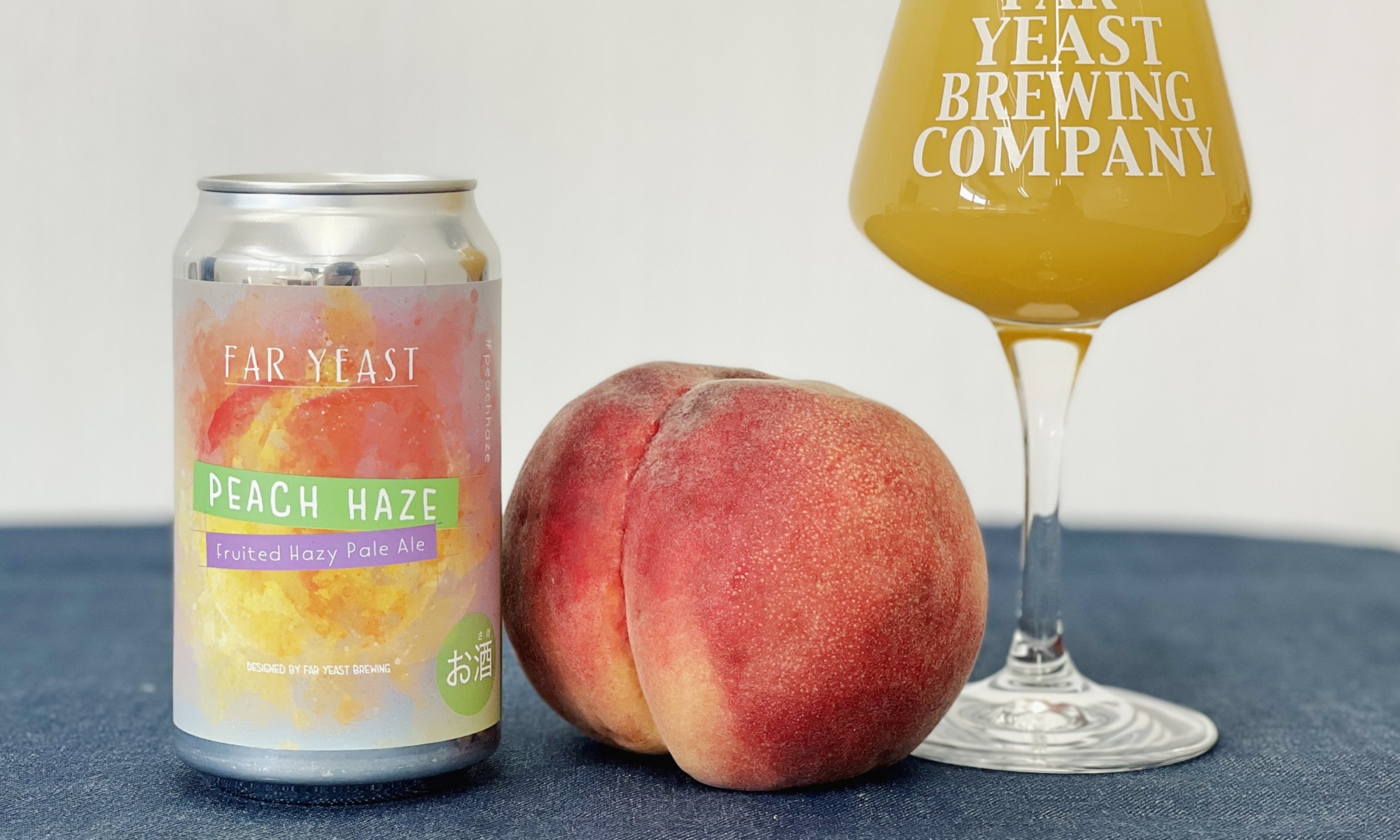 Far Yeast Brewing that has been introducing beers full of originality from Japan to the world, will brew a limited edition, Far Yeast Peach Haze using peaches from the peach farm “Peach Senka Yamashita” (Yamanashi City, Yamanashi Prefecture) in Yamanashi City, Yamanashi Prefecture, as the sixth edition of its “Yamanashi Support Project” to cheer up Yamanashi with beer. The beer will go on sale to the general public on Friday, August 27, 2021, and will be available for pre-order on the online store from 13:00 on Tuesday, August 17.

■Peach Haze,” which sold out last year very quickly, is back again!

The Yamanashi Support Project was launched in July 2020 with the aim of revitalizing local industries through the brewing of beer using products harvested in Yamanashi prefecture. In October, the company moved its headquarters from Shibuya to Kosuge Village in Yamanashi Prefecture, where the brewery is located, and has further strengthened its ties with producers and businesses in the prefecture. Far Yeast Brewing has released five beers as Yamanashi Support Project so far, including “Ume-kin’ Me Crazy!” using Ume harvested in Kosuge village, “GRAPEVINE” using grapes harvested in Nirasaki city, and “Omoiro Tomato Ale” using tomatoes harvested in Hokuto city.  Peach Haze is the sixth release in the series.

Following last year’s “Peach Haze” and the “Peach Flower Weiß” released in May this year, we are using peaches from “Peach Senka Yamashita”, a peach farmer who runs the popular cafe “Peach Farmer Cafe La Pesca” in Yamanashi City. We’re using peaches which cannot be sold on the market because of the difficulty in appearance.

The farm of “Peach Senka Yamashita” is located on the southern slope overlooking the Kofu Basin, in a perfect environment where it receives plenty of sunshine. This year, we used the Hakuho variety, which is representative of Yamanashi. It is a popular variety characterized by its low fiber content and freshness with plenty of juice.

The introduction of a press that can squeeze the juice out of the peaches has improved our work efficiency, and we were able to prepare two batches at once using a total of 1000 kg of peaches.

■The evolved recipe makes it possible to enjoy the texture of freshly picked peaches even more.

Far Yeast Peach Haze is a Hazy-style fruit pale ale made with an abundance of freshly picked peaches. The aroma of the peaches is enhanced by the use of two types of hops: El Dorado, which has a stone fruit aroma, and Mosaic, which has a tropical aroma.

Last year, we froze the harvested peaches once to destroy the fibers before pureeing them, but this year, we processed the freshly picked peaches directly into juice because they are a low-fiber variety. The juice was added twice, once during brewing and once at the end of fermentation, so that the peaches would be well integrated into the beer and the juiciness and thick mouthfeel of the fresh peaches, as well as the natural peach aroma, would be maximized. We used less oats than last year, which are often used in Hazy IPA to thicken and cloud the beer, so you can enjoy the natural mouthfeel of the peaches more.

When chilled, it has a refreshing peach cider-like flavor, and as the temperature rises, the aroma opens up and the sweet aroma spreads.

Far Yeast Peach Haze will go on sale to the general public on Friday, August 27th, and our online store will start accepting pre-orders from 13:00 on Tuesday, August 17th.

We will continue to collaborate with producers and businesses in Yamanashi Prefecture to bring you a variety of “Made in Yamanashi” beers.