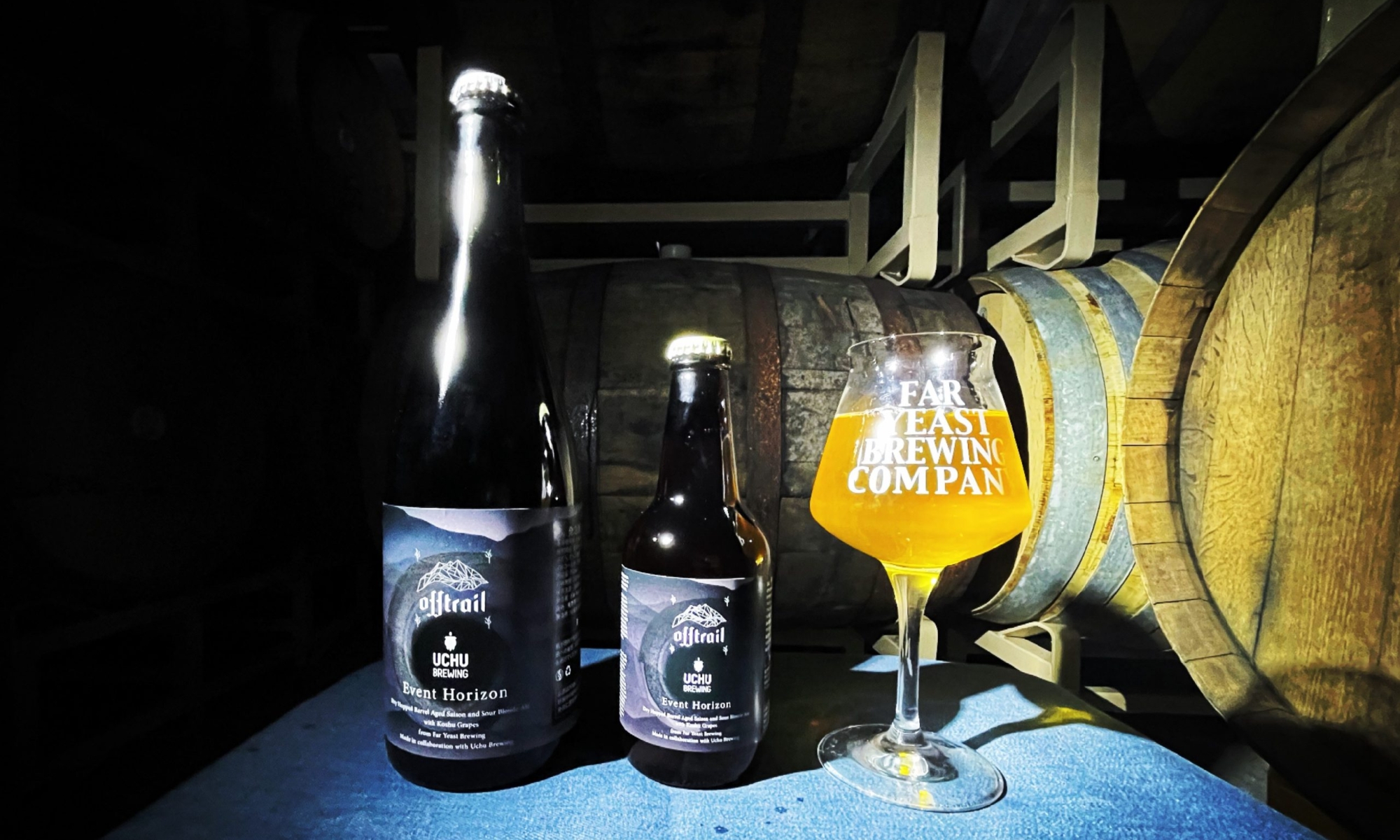 Far Yeast Brewing (Head Office: Kosuge Village, Yamanashi Prefecture, Japan; President: Shiro Yamada) whose mission is to introduce original beers from Japan to the world, released the 11th installment of the “Off Trail” brand: “Event Horizon”, a collaboration with Uchu Brewing, located in Yamanashi Prefecture and a close friend of the brewery.

In November of 2019, we welcomed “Off Trail” into our brand portfolio as our third brand, joining “Far Yeast” and “KAGUA.” The name “Off Trail” is inspired by our aim to innovate and experiment with every batch to discover new recipes and chart undiscovered territory in brewing. These unique brews often contain region-specific specialties or seasonal fruits such as grapes and peaches and are aged in wood barrels that were previously used for wine, sake, or whiskey.

“Event Horizon” is the long-awaited collaboration with Uchu Brewing Co based in Hokuto City in Yamanashi Prefecture. We have been deepening our relationship with breweries in the same prefecture.

Combining Uchu Brewing’s speciality of brewing IPA-style beers that make the most of hops with Far Yeast Brewing’s experience in blending through its Off Trail series, we came together to create this dry-hopped fruited sour ale.

To get started, the Uchu Brewing Team visited the Far Yeast Genryu Brewery for a tasting session to select barrels for blending the collaboration beer. We blended two beers together for the base beer of Event Horizon: our Japanese Grape Saison (released in Fall 2019) aged in whiskey barrels for 18 months and a kettle soured blonde ale fermented on Brettanomyces and aged in wine barrels for 11 months. 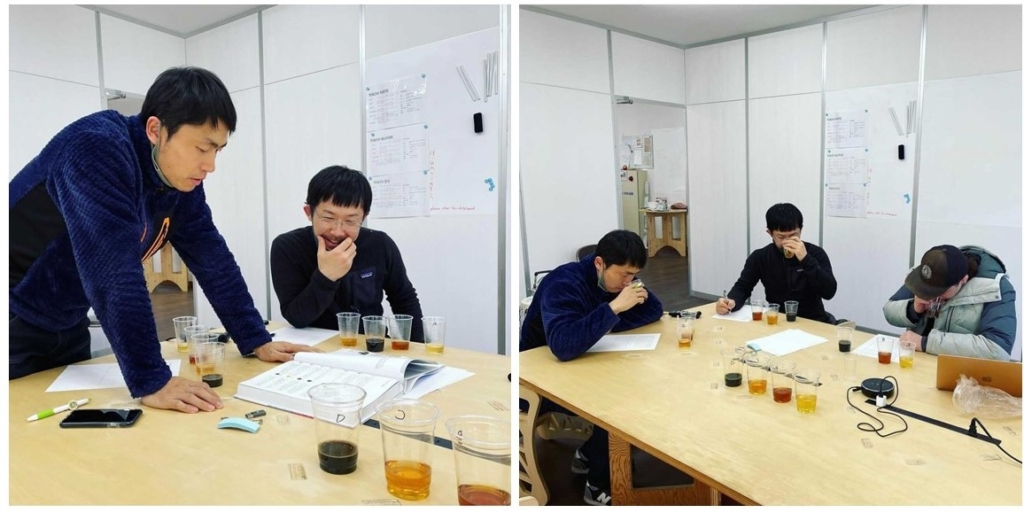 A few weeks later came blending day. The Uchu Brewing team joined us again to participate in the blending and dry-hopping processes at the Genryu Brewery. Together, we racked the barrels to tank and dry-hopped the blend with Citra, Simcoe, and Nelson Sauvin hops. 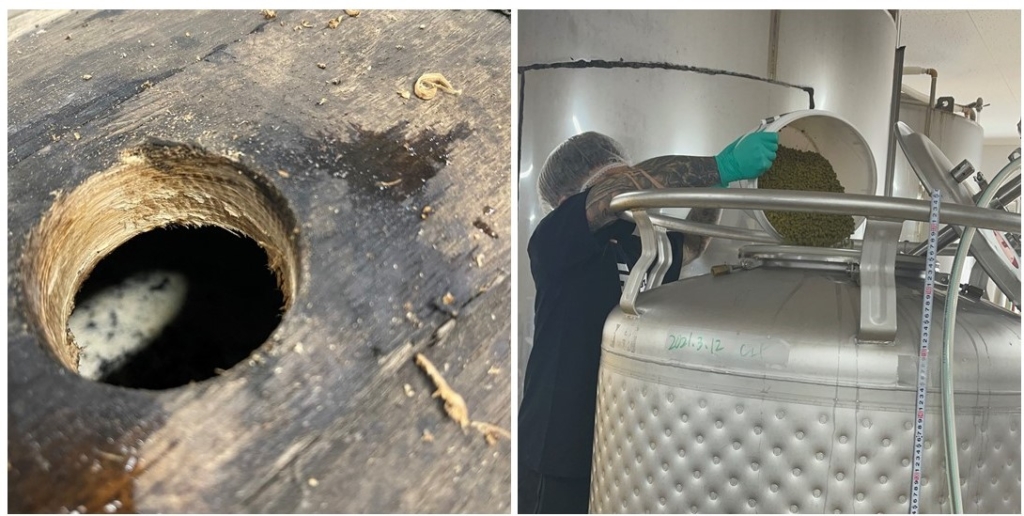 Event Horizon is perfect for those who like barrel-aged sours and hop-forward beers. It will take you on a flavor journey that stretches out from roasty whiskey barrel vanillins through the acidity of koshu grapes, terminating in hop-derived tropical and citrus fruit flavors. The expanse of flavors reminded us of that special place at the edge of a black hole where time stands still and the nature of reality comes into question. We hope you will find it as awe inspiring as it is delicious.

Uchu Brewing is a microbrewery based in Hokuto City, Yamanashi Prefecture, run by brewmaster Masahiro Kusunose and creative director Rumiko Suzuki. Representative Kusunose came across craft beer on the west coast of the United States in 2016 and was significantly impacted from the hop aroma of IPAs.

Before Uchu started brewing beer, they grew rice and other crops organically as “space farmers” starting in 2009. They first planted hops in 2016 and in 2017, they DIYed their brewery and started brewing, aiming to create a sustainable brewery with no environmental impact.  Uchu brewing brews under its motto, “Fresh hops mean everything to brewing good beer.” 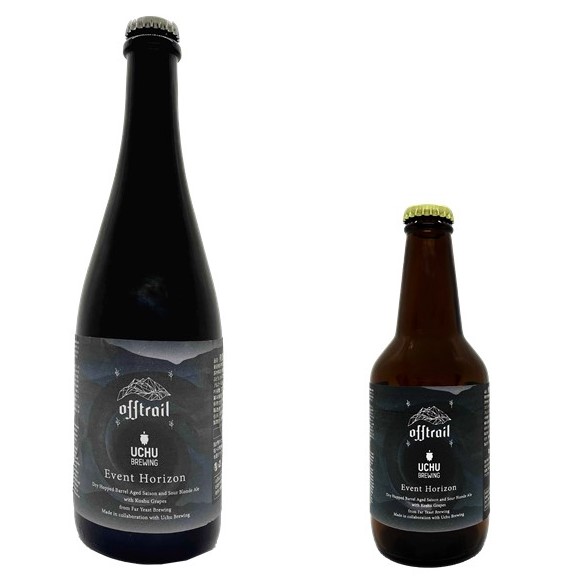