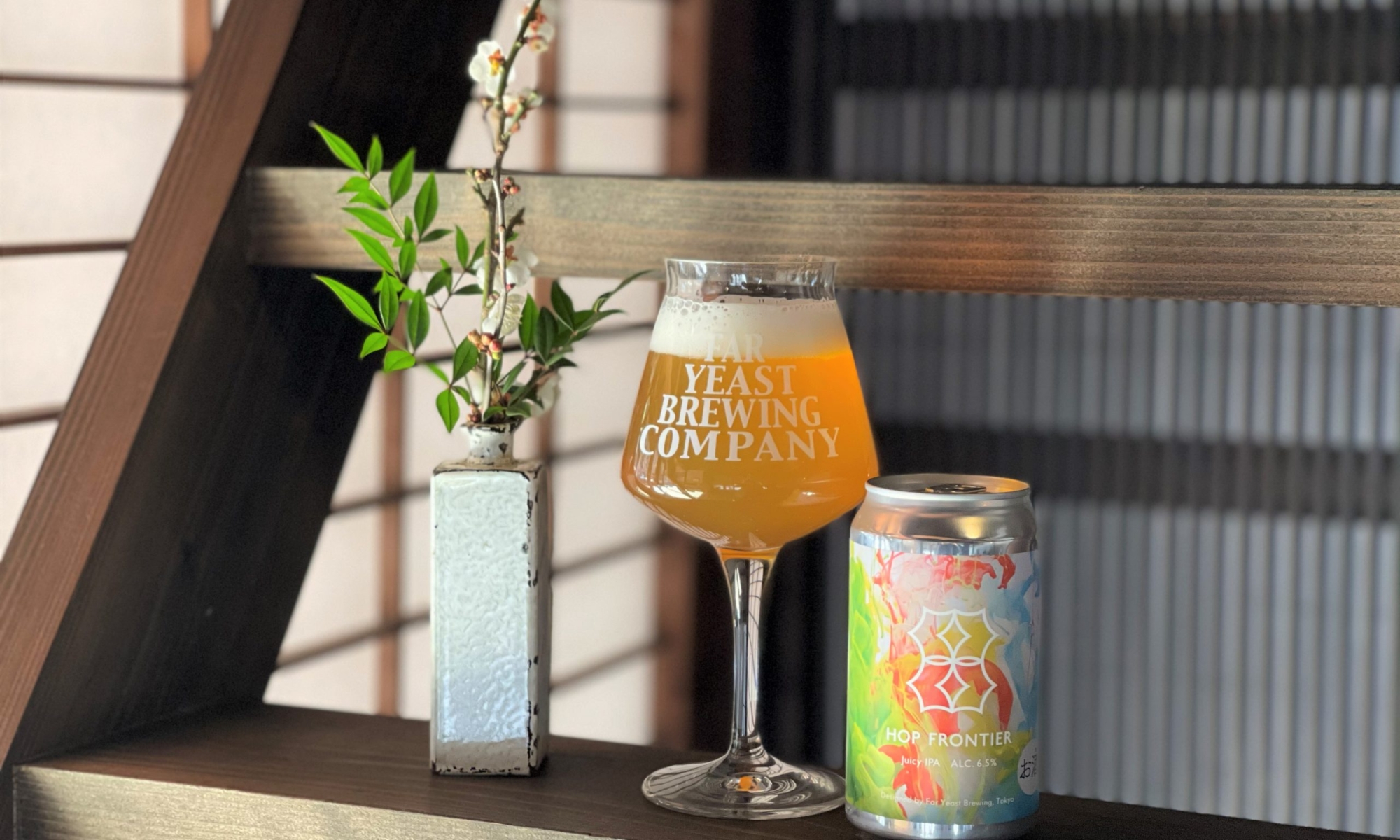 Far Yeast Brewing released “Far Yeast Hop Frontier -Juicy IPA-” as the second batch on Sunday 18th April 2021. Far Yeast Brewing has been practicing the latest hop theory and advanced brewing methods and has taken on the challenge of “new areas” of Juicy IPA. We targeted to bring out the aroma closer to the ideal shape and brewed this second batch with the feedback, experience obtained from the verification of the first batch. 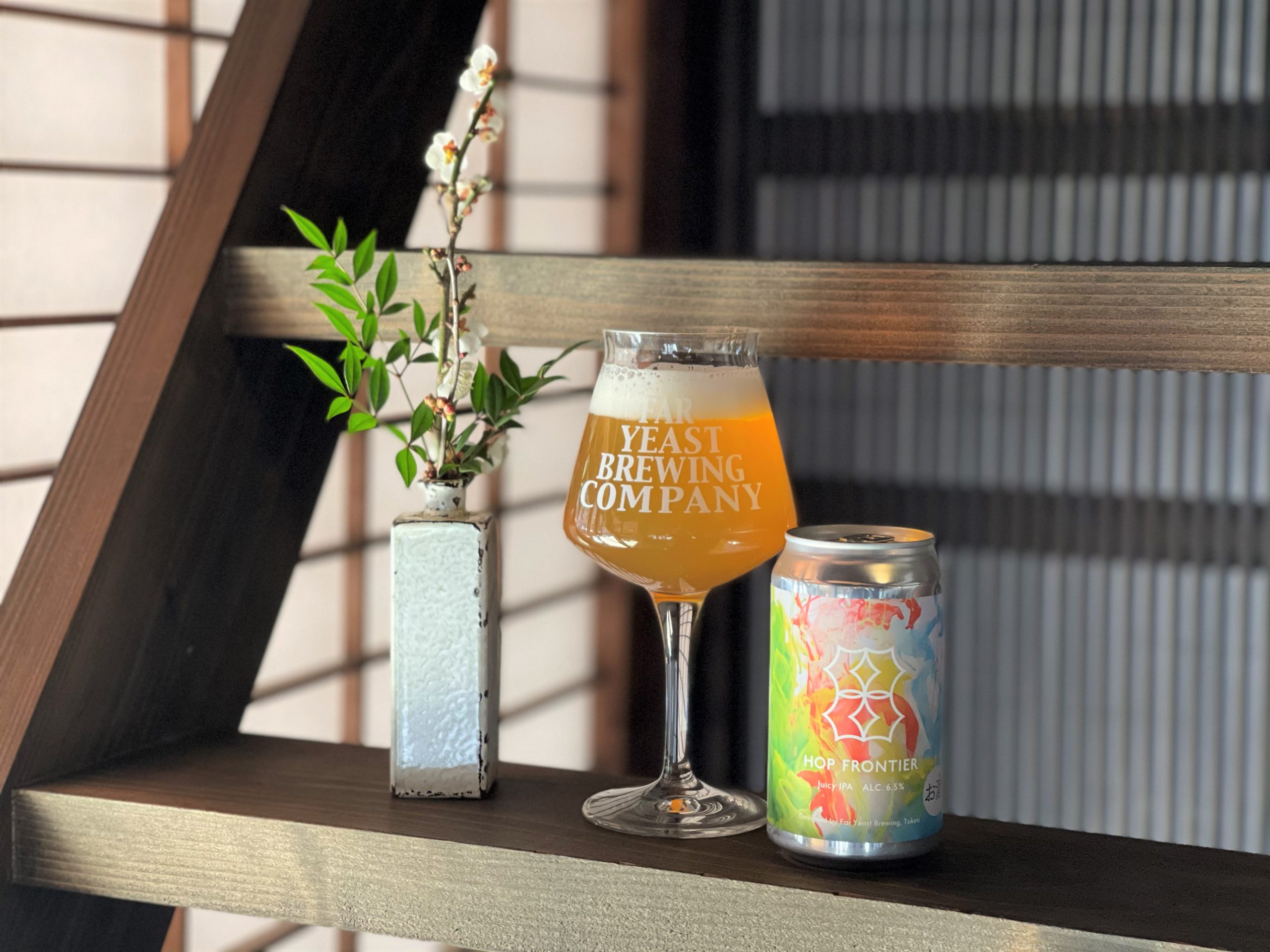 Juicy IPA-style beer is as hoppy as IPA but fruity and juicy taste with less bitterness. For that reason, Juicy IPA is now one of the most popular styles among a wide range of craft beer fans globally.  Far Yeast Brewing Hop Frontier -Juicy IPA, referred to as “Hop Frontier,” was the first challenge of using the latest hop theory and advanced brewing methods for brewing Juicy IPA in Japan.

This style is defined as “Juicy or Hazy India Pale Ale” in the Beer Style Guidelines by the US Brewers Association. The most remarkable feature of this beer style is that it focuses on bringing out the “juicy flavors” of the hops and has a cloudy, unfiltered appearance. The Juicy IPA style is currently one of the most sought-after beer styles among avid craft beer fans worldwide. Despite being recognized as a new beer style as recently as 2018, the Great American Beer Festival, the most prestigious beer competition in the United States, received the most entries in the Juicy IPA category in 2019 and 2020.

■The release news at the brand launch HERE

We brew “Hop Frontier” with carefully selected hop varieties based on focusing on “Survivables,” an ingredient that contributes to the aroma in the finished beer that survives through the brewing process. A new hop product, TRI-2304CR, is a new item from YCH after several years of research on Survivables. We are the first brewery in Japan that used this hop product and Talus, the latest hop variety as primary, and together with other three kinds of hops.

Taurus, a variety developed at the YCH hop farm, is expected to bring vibrant and fruity aromas when combined with TRI-2304CR. Based on various feedbacks from the first batch brew verification, we have adjusted the variety and amount of hops to use during dry-hoping.

To bring the beer closer to the ideal, we are trying to scientifically design the beer flavor by increasing the volume of Talus, which contains abundant geraniol, which is an aroma component.

Survivables are compounds that have a low sensory threshold and are relatively difficult to volatilize e.g. monoterpene alcohols, hop-derived esters, and thiols. These aroma compounds are characterized by their ability to “survive” the brewing process, contributing heavily to the beer’s aroma. Scott Janish introduces a methodology that effectively maximizes the use of Survivables to extract aroma on the hot side of the brewing process in his book, “The New IPA: Scientific Guide to Hop Aroma and Flavor”.

We will continue to improve Hop Frontier through repeat verification, aiming to make it a regular product in the Far Yeast brand range. The core concept of the “Far Yeast” brand is a beautiful and sophisticated taste and quality that will satisfy both craft beer geeks and beginners. By trying our Hop Frontier beers, we hope many people will feel free to enjoy the latest trend beer style.

To celebrate the release of the 2nd batch, an online event will be held on Thursday 29th April to enjoy food pairings with Hop Frontier.

The head chef of Far Yeast Tokyo Brewery & Grill at Gotanda Tokyo, a Far Yeast Brewing-owned restaurant, will introduce food pairing recipes to maximize the aroma of Hop Frontier. Participants will be able to enjoy the marriage of beer and food while cooking together. This online event will also introduce the concept of Hop Frontier and the critical points of pairing. We will have a special guest the editor Yoshi Wada from ferment books, who edited the Japanese translation version of the book title “The Art & Science of Foodpairing: 10,000 flavour matches that will transform the way you eat.”

The event is free of charge, and participants will receive a bottle or a can of Hop Frontier and the food pairing recipes before the event.

To coincide with the event, Far Yeast Tokyo Brewery & Grill will be offering a pairing menu prepared for this event at the restaurant starting from dinner time on Friday,23rd April.  Please enjoy the pairing menu focusing on aroma at our restaurant as well. The Hop Frontier pairing menu will be available until the end of May.

※The pairing menu will be discontinued when the Hop Frontier beer stock runs out.

※The period of serving the special pairing menu is subject to change depending on the semi-emergency coronavirus measures.

* The deadline will be as soon as the capacity is reached.

* This is an online event on Zoom.

* Participants will be sent a pairing recipe with one “Hop Frontier” in advance. Please prepare the ingredients for the recipe by yourself by the day. 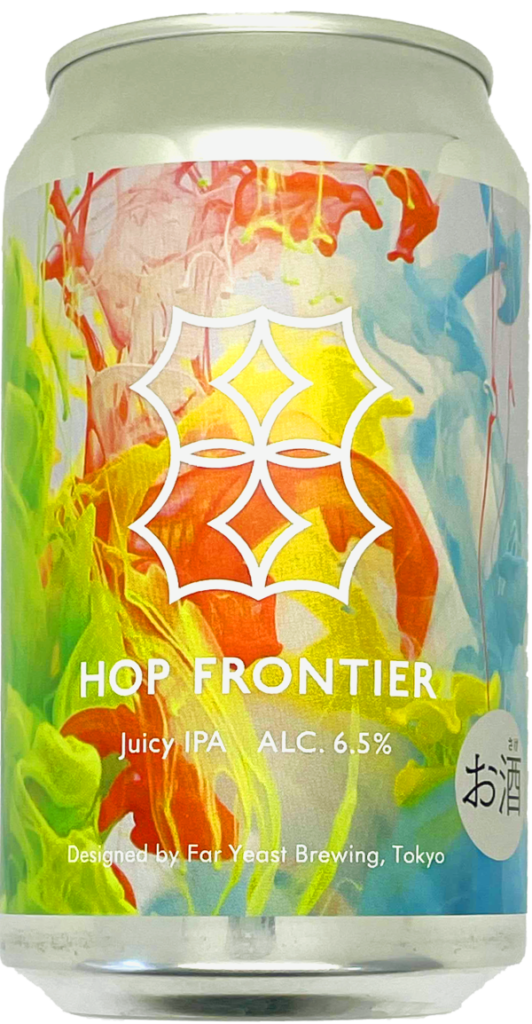