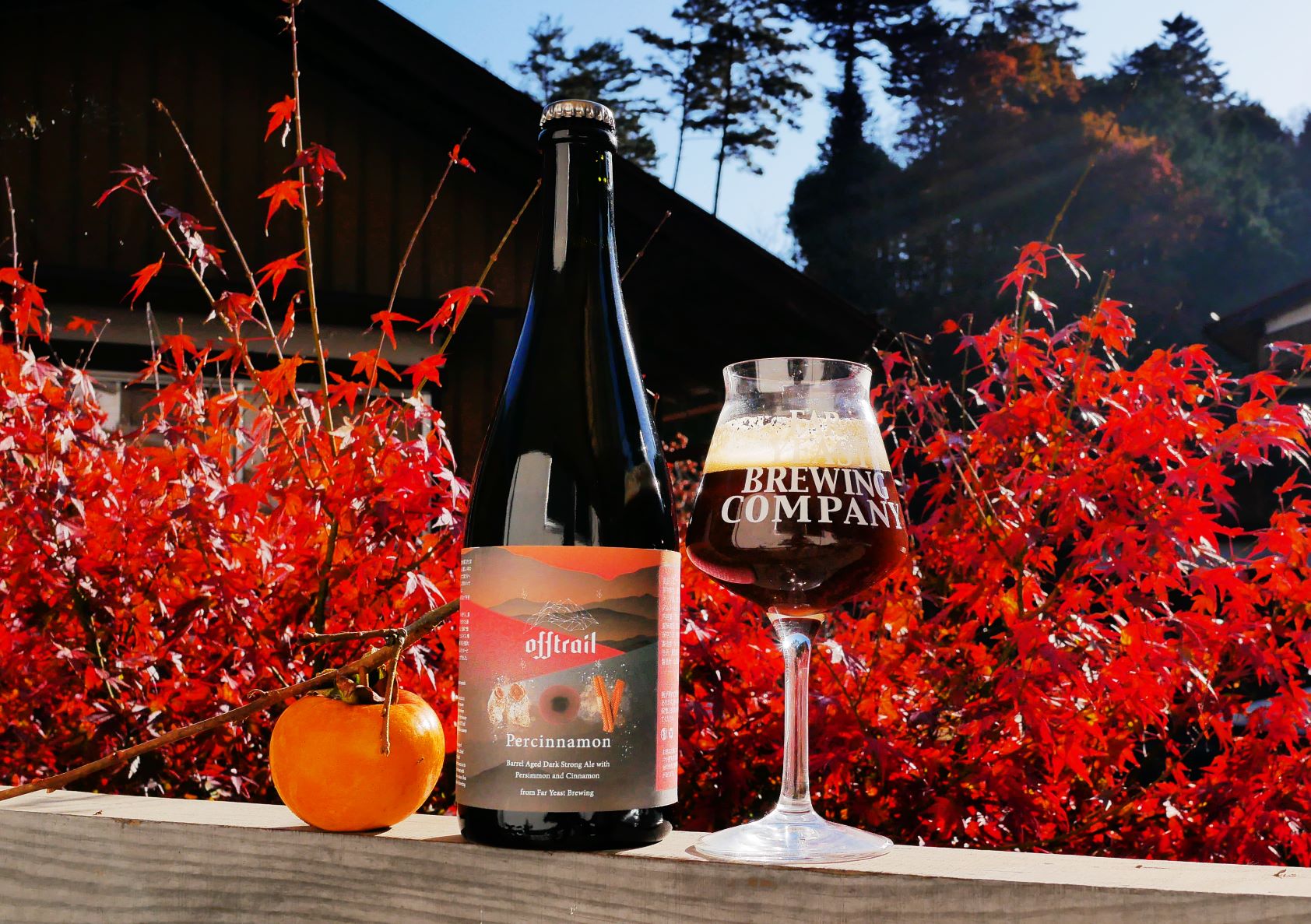 On Friday, December 25th, Far Yeast Brewing will release Percinnamon, a strong ale brewed with persimmons and spiced with cinnamon, to commemorate the first anniversary of Off Trail, a brand based on the concept of taking on the challenge of innovative beer.

Off Trail was born in November 2019 as the third brand following our two major brands, Far Yeast and KAGUA. Off Trail’s mission is to challenge viewer perception of craft beer and discover new possibilities in ingredients and process. The name embodies the spirit of the project, conjuring the notion of forging a new path on an unpaved road, going Off Trail, rather than keeping to the beaten path of conventional brewing. Our aim is to brew unique beers using barrel-aging and blending techniques, wild yeasts and bacteria, and local ingredients to produce beers that are unique expressions of our region, resources, and creativity.

Percinnamon, the eighth release in the Off Trail series, celebrates and memorializes the brand’s first anniversary. Inspired by the persimmons ushering in Winter and dotting the landscape of Kosuge Village, home to our brewery, in late autumn, we came up with the idea of brewing a project using dried persimmons as the featured ingredient.

After a lot of mock blending and careful consideration, we chose to pair the persimmon’s aroma with cinnamon spice to give depth and balance to the blend. As the flavors combined and the ratios were dialed in, we struggled to find the right amount of cinnamon to add. The cinnamon was more potent than we had anticipated, overpowering the aromas and flavors of the persimmons in every combination we assembled.

On a whim, we tried adding a whiskey barrel-aged stout to the blend and were surprised to discover a wonderfully balanced beer. The stout brought darker tones forward and mellowed out the cinnamon just enough that the persimmons were able to shine through. Finally the Percinnamon blend was decided: three different Barrel-Aged Strong Ales and a Whiskey Barrel-Aged Stout.

Upon first encounter, aromatic cinnamon greets your nose followed by aromas reminiscent of caramel, dried apricots, and raisins. From the first sip of this beer a warmth washes over you followed by the rich flavors of dried persimmons, chocolate, cinnamon, and oak tannins. Enjoy this rich dessert beer on a cold winter night in a warm room with roasted chestnuts and your favorite pastries.

Percinnamon will be on sale nationwide on Friday, December 25th 2020.