As COVID-19 continues to lead to event cancelations and a decline in tourism around Yamanashi prefecture, we at Far Yeast Brewing are doing what we can to help revitalize our local agricultural, tourism, and food & beverage industry partners the best way we know how: brewing beer! The first Yamanashi Support Project, “PEACH HAZE,” was brewed in July using peaches harvested in Yamanashi Prefecture. The second project, “Ume-kin’ Me Crazy!” was blended using plums grown in Kosuge Village, home to our head brewery and company headquarters. Both products achieved great success and were very popular.

Our third release in the Yamanashi Support Project is GRAPEVINE, a beer brewed with grapes from Sunrise Farm in Nirasaki, Yamanashi Prefecture. Three grape varieties were used: Kyoho, Gorby, and Pione. Kyoho and Gorby were the grapes produced by a Japanese Viticulturist.  We were planning to brew a beer using grapes from Yamanashi Prefecture, a friend of the head brewer introduced us to Mr. Hirotaka Yokomori of Sunrise Farm, and we were able to brew this beer.

Under the influence of the long rainy season in July and the intense heat in August 2020 this year, the plant disease called Glomerella cingulata spread mainly among black grape varieties such as Kyoho grapes and Pioneer grapes, dropping yields significantly in Yamanashi Prefecture. At Sunrise Farm, our partner for this time, some of the Kyoho grapes and Peonies infected the disease too, and once a part of the bunch infected, the product value vanished, so they were not able to sell them as products. As a result, many defective grapes had to be discarded. However, the part of bunch of grapes that are not affected by the disease is still delicious with a right balance of sweetness and sourness. So, we carefully cut off the diseased part from a bunch of grapes one by one and remained a part that could be used for brewing beer.

When we received the grapes from Sunrise Farm, our brewing staff visited them and helped harvest the grapes and dispose of the defective grapes.  We could hear various stories about the difficulties of cultivating crops that are strongly influenced by nature. It was a meaningful opportunity for us to interact with our neighbor agricultural producers in Yamanashi Prefecture.

■Adoption of a part of winemaking methods

We have adopted the “cold soak” method of winemaking. Before the fermentation process, the entire tank is placed in a refrigerated container and marinated at a low temperature for approximately one week to extract more color and aroma components from the grapes.

■The Italian Grape Ale, with its distinctive fruitiness.

This beer style is the Italian Grape Ale. It is the beer style started by Italian craft breweries using wine grapes and uses grape pulp, skin, and juice in the beer brewing process. GRAPEVINE introduced cold soak, a wine technique, before the fermentation process, and added fruit juice during the fermentation process. The hops used was Enigma, with tropical fruit, berry, and stone fruit aroma, combined with the grapes’ complex aroma. The pale malt mixes’ bronze color with the grapes’ color to create an orange wine appearance fruity beer.

GRAPEVINE will go on sale nationwide on Wednesday, November 18.

And, It will be on tap at our brewpub, Far Yeast Tokyo Brewery & Grill, in Gotanda, Tokyo.

We will continue brewing beers with a variety of made-in-Yamanashi ingredients. 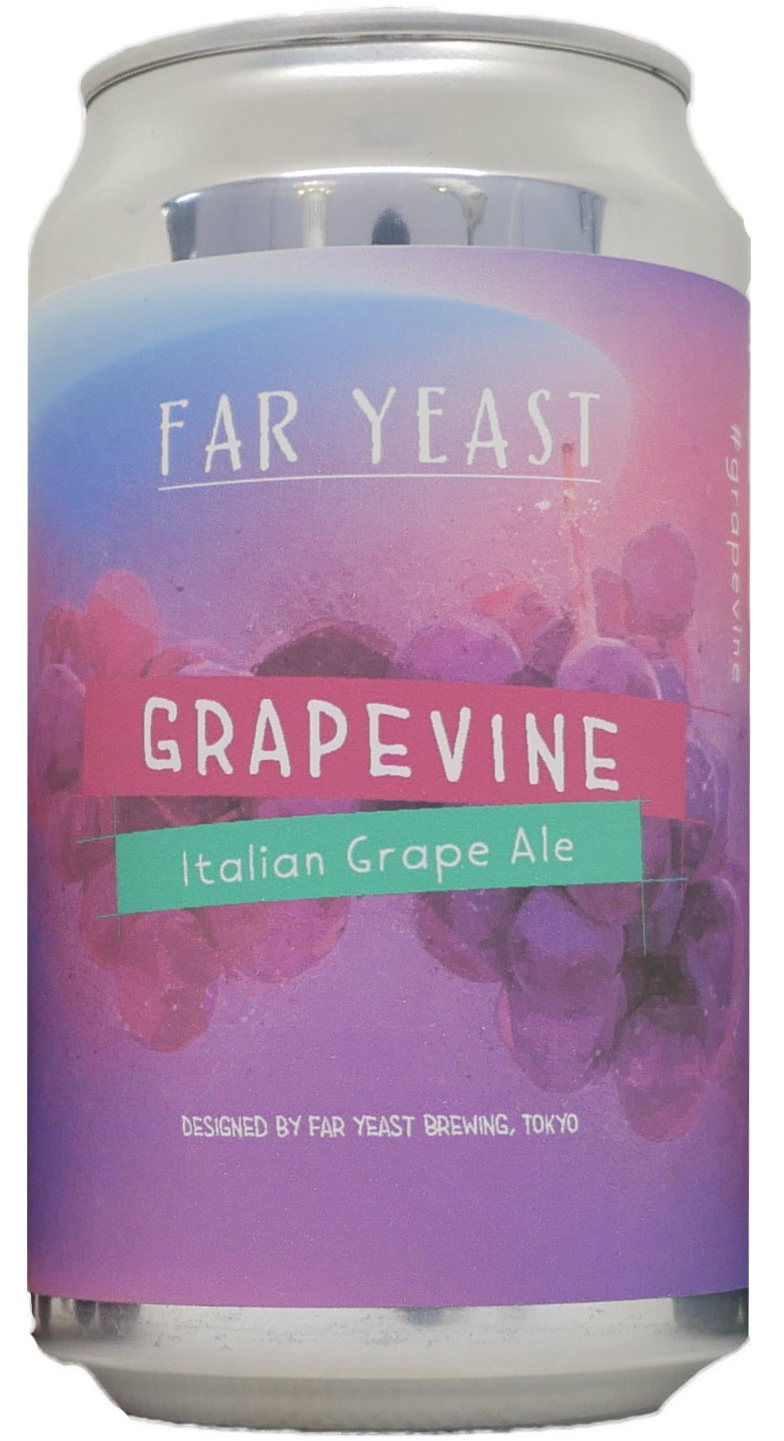 ＊This beer “GRAPEVINE” was named after its meaning of the word grapevine— born from many people’s connections.